First photos released by Tiga of their LMP2.

The 2014 Tiga LM214 was announced on September 26th and now the Cheshire, UK team has released the first photos.

Originally developed by Embassy Racing, the WFR01 has undergone changes made by the Tiga designers and technical team that will allow the Tiga to compete at the 24 Hours of Le Mans under the ACO regulations and the World Endurance Championship along with the European Le Mans. It will have the required updates for the United SportsCar Championship.

Tiga Cars Mike Newton, said "We are very pleased on how the design is evolving, with the basic chassis and layout proving to be a good platform which has adapted well to the current regulations. The mechanical updates are also progressing well, and look to be testing very soon"

Working with Engine Developments, the Judd HK is the engine manufacturer for the first tests. 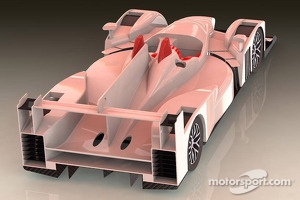 Technical information includes a complete 'Quick Release' tail section, which can be easily released without the need for any tools.