Signatech-Alpine to run two Alpine A450s at the pre-Le Mans Test Day on Sunday, June 9. The car’s first chance to lap the full Le Mans track will be followed by a busy fortnight for Alpine.

Le Mans, March 8, 2013 – In the presence of Renault’s Chief Operating Officer Carlos Tavares and the Automobile Club de l’Ouest’s President Pierre Fillon, Alpine announced its return to motor racing at the famous French circuit. Three months and one day later, and 35 years after the brand’s Le Mans victory in 1978, two Alpine A450s will take to the legendary track. 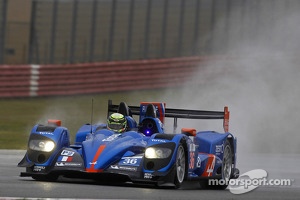 Since its first public appearance, the Alpine A450 has contested two rounds of the European Le Mans Series. The team finished on the podium at Imola, Italy.

Guyancourt, near Paris, Friday, June 7 – The Signatech-Alpine team will visit the Renault Technocentre to meet members of the Group’s staff. The following day will see the two Alpine A450s attend scrutineering at Le Mans, while the pit-lane will be open to spectators. Then, on Sunday, the two LMP2 prototypes (N°36 and N°37) will get their first chance to lap round the legendary circuit.

“Having two Alpine A450s at the Test Day will enable us to do carry out extra test work ahead of the 2013 Le Mans 24 Hours,” observes Signatech-Alpine’s Team Principal Philippe Sinault. “We will try to make full use of the time we have available before the race, starting with Sunday’s run when we will test our new ‘Le Mans’ aero package and Michelin tyres. We will also use our first appearance at Le Mans in the colours of Alpine to match the car to the famous circuit’s specific features. This is a fantastic project and the public has high expectations. This year’s Le Mans will have a very special taste for us…”

Nelson Panciatici and Pierre Ragues, who came fourth and fifth in the first two rounds of the 2013 European Le Mans Series, will be joined for the Test Day by Tristan Gommendy and Paul-Loup Chatin.

“It will be an important test for us,” predicts Nelson Panciatici. “We will need to work on a number of different areas in readiness for Le Mans, such as tyres, fuel consumption, etc. We also hope to collect a great deal of data which will then need to be analysed. Although there won’t be much rubber on the track, it will be a great chance for us to find our marks.”

“I can’t wait for the countdown to Le Mans to begin,” adds Pierre Ragues. “We have been preparing hard all year, with a carefully planned test programme. Even though Le Mans is supposed to be an endurance race, I am sure everyone will hit the ground running at 9am on Sunday. We will need to find our confidence as quickly as we can and make maximum use of the running time available to us.”

Tristan Gommendy has been part of the team since the programme’s announcement and he will share the workload as he prepares for the big race. “From Sunday, we will really be into the heart of the matter,” he underlines. “Every kilometre will count. I often say that Le Mans begins on the Test Day and I can hardly wait. I feel like a child about to open a present.”

The day will also be crucial for Signatech-Alpine’s reserve driver Paul-Loup Chatin: “It will be my first chance to lap round the full circuit. Representing Alpine’s colours is a unique experience for any driver. I will need to complete 10 laps to be eligible for the Le Mans 24 Hours. After that, my aim will be to get as much experience under my belt as possible and provide the team with some useful feedback…”