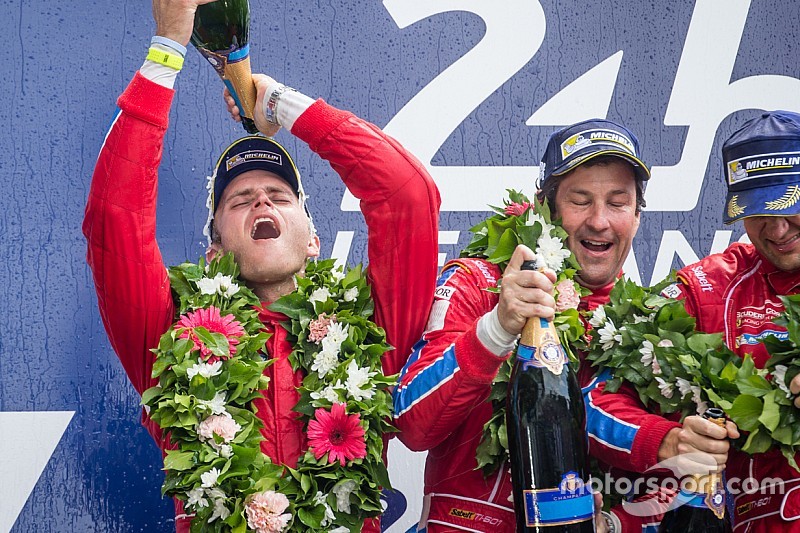 The American-based Scuderia Corsa Ferrari team says its GTE Am victory in the 24 Hours of Le Mans on Sunday didn’t seem real.

The #62 Ferrari 458 Italia driven by the all-American lineup of Townsend Bell, Jeff Segal and Bill Sweedler defeated the #88 Abi Dhabi-Proton Porsche, set up by a fantastic stint from Bell in the late hours of Saturday evening.

“Winning at Le Mans is so special, you just can't put it into words,” said Segal, who took the chequered flag. “Standing on the top step of the podium here is something you dream about but when it is happening it doesn't seem real.

“It's difficult to put into words what this means – to win here representing Ferrari and Scuderia Corsa. My teammates Bill and Townsend were outstanding, and the crew were flawless, and the Ferrari was just perfect here.

“Everything came together just perfectly.”

Segal partnered with Scuderia Corsa to win at the 12 Hours of Sebring in March, and has now won two of the world's biggest endurance races with it in the same year.

Victory at the second attempt

It was only the team's second appearance at the French endurance classic, and it finished three minutes clear of the opposition after 331 trouble-free laps and 25 mistake-free pit stops.

“Since our first Le Mans last year, our only ambition was to get back to Le Mans and win,” said Sweedler. “We knew that if we came back with the same Scuderia Corsa team, and the same drivers, we'd have a winner.

“Last year we didn't quite know what to expect, but this year we were ready. But I think we are all a little bit shocked that it happened!"

Bell added: “It's so fun to win with these guys. We've had a lot of success together.

“With Scuderia Corsa, we have won Le Mans as well as the IMSA championship. Here, we had a terrific race. The Ferrari was exceptional, and my teammates were so fast that we won it with a margin.

“You couldn't ask for a better race than this.”