After a tough start to their Le Mans weekend, which included losing a teammate and their primary car, and then moving up to the LMGTEPRO category filled with factory entries, and then choosing to run the full 24 hours with just two drivers Cooper MacNeil (Hinsdale, Ill.) and Jeroen Bleekemolen (Monte Carlo) crossed the finish line in fifth.

ProSpeed Competition rebuilt an entire car in less than 24 hours to provide a great Porsche RSR for the duo to tackle the twice around the clock race. Except for two tire punctures while Bleekemolen was at the wheel, the car never missed a moment of track time. As a result of having to limp the car around each time from the beginning of the Mulsanne Straight, more than four miles, and costing several laps, the two drivers drove triple stints throughout the night with MacNeil closing bringing the WeatherTech Racing Porsche to the line with a final effort to get a top five finish. Finishing ahead of several factory entries the pair that won the American Le Mans Series GTC Championship in 2013 are pleased with the effort and the result. 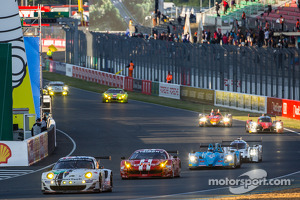 "The car ran flawlessly the entire race," MacNeil said. "The ProSpeed guys did a great job to rebuild the car and it was just as good, maybe better, than the primary car. They didn't sleep for two days. A top five in the LMGTEPRO Class is a great result from where we started the weekend. We miss Bret, but I know he shares in our excitement. The car doesn't have a scratch on it from contact or offs. We kept it clean and on the track. I got back in at the end and had to push because I didn't know where the Aston Martin was and it was our goal to finish in the top five or better."

"We had nothing but support from everyone in the paddock for Jeroen and myself to take on the race with just the two of us" he continued. "Our American racing friends all helped us this weekend. We got a ton of ice from Pratt & Miller to keep us cool and Porsche North America and Dempsey Racing gave us use of their medical services if we needed them. Jereon and I were well taken care of by the ProSpeed physio team and we were always ready to get back in the car. It was a challenge, but I think I got over 1,100 miles of Le Mans laps under my belt this weekend. That will pay off when I come back next year."

For Bleekemolen it was a once in a lifetime opportunity to do Le Mans with two drivers.

"That was crazy," Bleekemolen said. "I am not sure if I would do it again. It is very cool and something to be proud of for sure. The car was just finished before the race started and it crossed the line without and issues at all. We had no real problems and Cooper just did a great job. He brought it home for us and he drove every time he was scheduled. He is the Silver driver with the most laps on the weekend. I did my 14 hour maximum drive time, over 1,500 miles of racing. We did what we set out to do. We were going to run our own race, keep the car safe and run consistent lap times. Cooper did a great job and never had an issue in traffic and never put a wheel off. After the beginning to the weekend we had Bret along with us in our hearts and we brought it home. A great result to get fifth in the pro division."

Hakkinen: Bottas not given enough credit for his Mercedes F1 job