Young Driver AMR-trio Nygaard/Poulsen/Simonsen completed 1.000 km of testing and are the second quickest in GTE-Am-class.

Le Mans/France - Young Driver AMR is well prepared for one of the biggest challenges in motorsport, the 24h of Le Mans/France. The all Danish driver line up of Christoffer Nygaard, Kristian Poulsen and Allan Simonsen completed a successful day of testing in their Aston Martin Racing entered Young Driver AMR-Aston Martin Vantage GTE at the official test day for the 90. edition of the world’s most important endurance race. 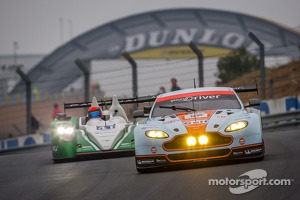 The official test day is the only opportunity to test for the 24h race (22./23. June) on the original track. At the end of the test day, current GTE-Am-class leaders Nygaard/Poulsen/Simonsen set the second quickest time in the GTE-Am-class, only 0,3 seconds behind a sister Aston Martin.

Despite changing weather condition with rain until noon and only two hours of testing in dry conditions, the Aston Martin Vantage ran flawless. The highly experienced Simonsen, who started already six times at Le Mans, gave the most seat time during the day to Nygaard and Poulsen, who will start into their third 24h of Le Mans in less then two weeks time.

Overall, the Young Driver AMR-drivers completed 1.000 km during the test and worked on set up, aerodynamic and tires. In the wet morning session, the pale blue Aston Martin sporting number #95 was the quickest car in class. As the day ended, Nygaard/Poulsen/Simonsen where only 0,3 second shy of the quickest time in class.

"It rained a lot during the day, but everything went really well for us and we completed our program“, said Nygaard after the test. "The car felt great the whole day."

Also Poulsen, who is a class winner at Le Mans, was satisfied with the test day. „We are now really well prepared for Le Mans. The times showed that we are competitive in our class and from the morning until the evening, our Aston Martin ran perfect without the smallest issue.

Compared to last year, the car is now much easier to drive. It’s more comfortable to drive, you don’t have to push so hard to be quick which gives a good feeling for the race.”

Nygaard, Poulsen and Simonsen have now one week to the rest, before they return to Le Mans for the race week, which starts for the three Danes and their Aston Martin officially on Monday, 17th at 15:30 hours with the official technical checks of the car and the traditional team picture in the town centre of Le Mans.

A good Le Mans test day for Panciatici and Alpine

As we remember Dan Wheldon, we pray for Jules Bianchi