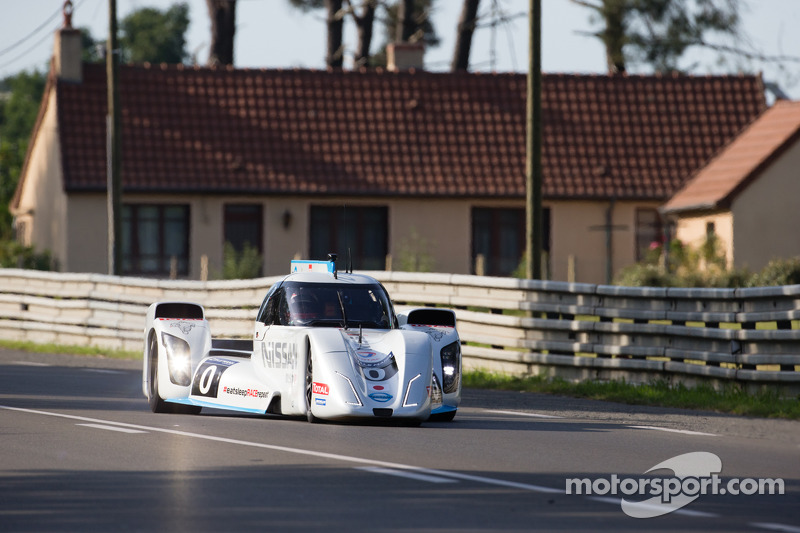 Nissan made history at Le Mans this morning with the revolutionary Nissan ZEOD RC recording the first ever all electric lap of Le Mans.

GT Academy winner Wolfgang Reip was at the wheel as the ZEOD RC completed an entire 8.5-mile lap powered by a pair of 110 kW electric motors rotating at 40,000rpm during the morning warm-up.

The Nissan ZEOD RC previously hit its first target during Thursday evening qualifying when it topped 300km/h on the Mulsanne Straight on electric power only with Japanese driver Satoshi Motoyama at the wheel.

“It is a huge thrill for me to become the first ever driver to complete an all-electric lap of Le Mans – especially since this is my debut at the race,” Reip said.

“I used electricity to originally become a racing driver through GT Academy and now I’ve used it again to achieve this tremendous goal. I’m really thrilled for the entire team and honored I got the chance to be behind the wheel when it first happened.

“I actually got held up by a GT car during the lap. I was able to get past and it was quite a strange sensation to go by on electric power.”

In addition to making history with the 300km/h electric target and the all-electric lap, the car is also the first in modern history to compete at Le Mans without traditional rear view mirrors. The Nissan ZEOD RC drivers are made aware what is happening behind them through a camera and integrated radar system – technologies that are being tested to further enhance road car systems like the Nissan Safety Shield.

“This is the only true prototype on the grid – literally the team have been testing, changing and updating the car every hour as we worked towards achieving our goals,” said Darren Cox, Global Head of Brand, Marketing & Sales, NISMO.

“Our team actually worked through the night with no sleep to try to achieve the goal in the warm-up this morning. They are in the middle of the 48 hours of Le Mans.

“The lessons learned from the development of electric drive systems and battery technology will not only improve the Nissan road car of tomorrow but will also be transferred into the Nissan GT-R LM Nismo – our new LM P1 car which will race at Le Mans next year.”

Nissan launched its upcoming LM P1 program on May 23 in London. The Japanese manufacturer will compete against Audi, Toyota and Porsche from 2015 at Le Mans and in the FIA World Endurance Championship.