The wins were Antinucci’s 13th and 14th in the category, cementing his status as the most successful driver in the one-make category.

The American got a strong getaway as the start of Saturday’s opening race as fellow front-row starter and former IndyCar driver Conor Daly dropped to fifth after being forced over the kerbs at Turn 1.

That allowed Andrea Amici up into second place in his Prestige Performance/Wayne Taylor Racing Huracan EVO with Patrick Liddy third.

Amici hounded Antinucci for much of the opening stint before the mandatory pitstops as the pair broke clear of Paolo Ruberti (Dream Racing Motorsport), who had passed Liddy for third into Turn 1.

Lewis then took over from Antinucci in the #29 Huracan and edged out to a 4.226s lead over Sandy Mitchell – who swapped with Amici – in the #1.

Scotsman Mitchell had been closing the gap to Antinucci at the beginning of his stint, but a full course yellow was brought out after D. Bryce Miller spun out at the Esses following a left rear puncture.

A poor restart for Mitchell allowed Ruberti’s teammate Cedric Sbirrazzuoli to take second place and help Antinucci open up a three seconds advantage which he held until the flag.

Sbirrazzuoli withstood several attacks from Mitchell to maintain second, but the Monegasque also fell victim to a puncture on the final lap, handing back the position to Mitchell.

Teenager Steven Aghakhani took a well-deserved Am class victory on his series debut in the US RaceTronics machine, while ex-CART and Indycar star Bruno Junqueira claimed Pro-Am honours with sixth overall.

Sbirrazzuoli started Race 2 from pole and led Mitchell at the start as Lewis dropped to third place.

Further back, 2003 CART champion Paul Tracy – another driver making his debut in the championship this weekend – collected Aghakhani’s Huracan at the Boot, with the pair having to take to the gravel.

Am class runner McKay Snow then brought out the full course yellow after crashing at the exit of the Bus Stop chicane just before the pit window opened. The solo Change Racing entry took too much of the exit kerb and made heavy contact with the outside tyre barriers.

Mitchell and Lewis did just one lap of green running before making their stops, with Sbirrazzuoli doing the same one lap later.

Antinucci took over from Lewis and shuffled to the front, where he remained unchallenged thereafter.

Ruberti emerged back out in front of Amici, who were joined in a titanic tussle for second place by Daly.

The order remained unchanged until the flag, with Ruberti trailing Antinucci by 3.240s.

Jake Eidson and Damon Ockey claimed the Pro-Am victory after a second place in Saturday’s opening encounter despite serving a drive-through penalty for a jump-start. US RaceTronics pairing beat Ryan Hardwick and Supercross sensation Chad Reed, with the Junqueira/Bradley Baker Huracan third. 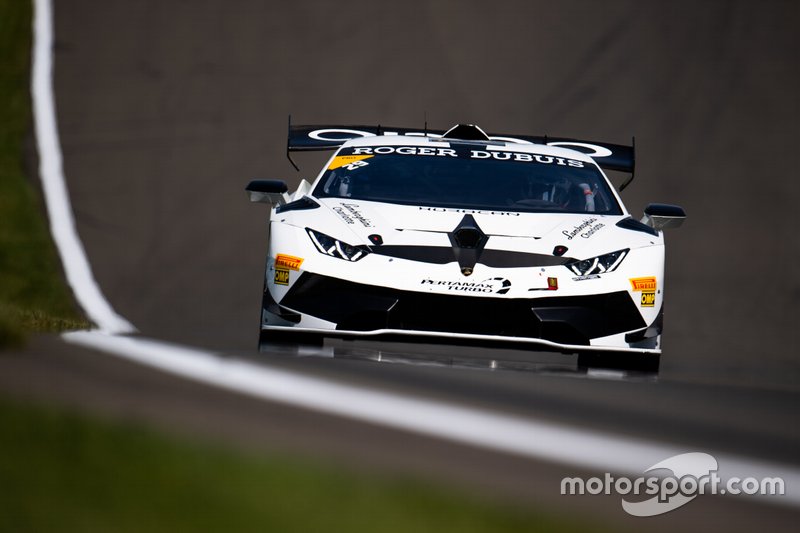 More from
Stephen Brunsdon
Race Of Champions
Video Inside
General

Bell has high hopes for Lamborghini and O’Gara

Kaz Grala: Daytona 24 will be "Battle Royale all the way to the finish"

A piece of motorsports history was made on Sunday, as Victor Gomez IV became the first Puerto Rican driver to win the Am class of the Lamborghini Super Trofeo World Finals – effectively crowning him as a World Champion of the prestigious one-make series.

VS Racing’s Karol Basz and Mattia Michelotto claimed a resounding victory in the season-ending Lamborghini Super Trofeo World Finals at Misano Adriatico, winning both of the 50-minute races from pole position. The success comes just one week after VS Racing wrapped up the International GT Open championship title, which caps off a sensational season for the team.