American Ryan Hardwick came from third on the grid to take a superb victory in the first Lamborghini World Finals race for the Super Trofeo Am category at Vallelunga on Saturday afternoon. 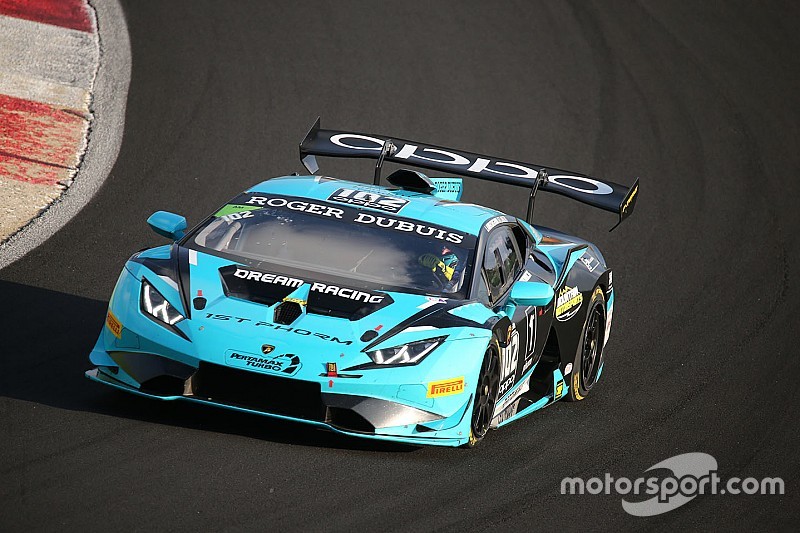 It was a hard-fought win for the Dream Racing driver who passed Dorr’s Florian Scholze in the closing stages to secure the victory.

Seven laps from the end of the race, Hardwick overtook Raffaele Giannoni for second place, taking advantage of Giannoni slowing as they both descended on a backmarker.

Once clear, Hardwick had Scholze in his sights – who along with his teammate Manuel Lauck had led from pole position.

Hardwick was stronger under the brakes at the final corner, Roma, and after two attempts, finally made the move for the lead stick just two laps from the chequered flag.

Scholze (and Lauck) had to settle for second while Tricolore’s Giannoni took the final podium position. At one stage Giannoni looked the most likely to challenge Scholze for the lead, but after he had been passed by Hardwick, Giannoni made a mistake on the fast run down to Turn 3 and had to settle for third.

The fight for fourth place was equally as intense with Davide Roda’s Antonelli-run Huracan getting the better of the US Race Tronics machine of Damon Ockey.

The pair ran nose-to-tail for most of the race and while Roda had managed to pass Ockey during the mid-race pitstop, Ockey retook him on-track.

Finally, Roda made the move back past Ockey to finish just 0.204s ahead of him at the flag.

There was heartbreak in the Super Trofeo Lamborghini Class of this race, as pole sitter and race-long class leader Brett Meredith retired at the side of the track with just two minutes of the 50-minute race to go.

The final race today is the first in the Pro & Pro-Am class, with two more races taking place at Vallelunga on Sunday.