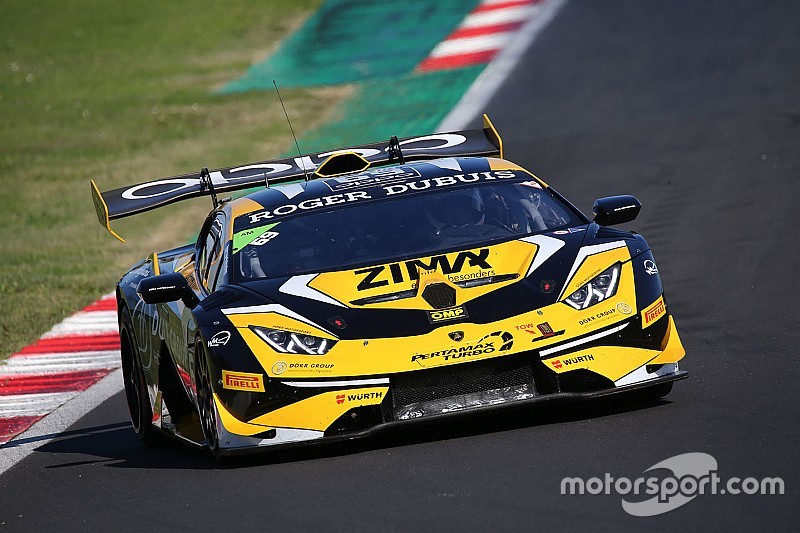 Manuel Lauck and Florian Scholze stayed out of trouble to triumph in the second Super Trofeo Europe AM & Lamborghini Cup race at Vallelunga.

Their nearest competitors tripped over themselves, paving the way for the Dorr Motorsport team to scoop their second win of the day.

The opening stages of the 31-lap race were led by Raffaele Giannoni’s Tricolore Huracan from Antonelli Motorsport’s Glauco Solieri and his teammate Davide Roda in third. The three cars ran nose-to-tail as they approached the mandatory pitstops at half-distance.

During this sequence, Roda managed to nab second off Soleri and by lap 17 he was able to snatch the lead from Giannoni. It looked as though victory was assured for Roda, but he was the master of his own downfall.

Firstly, he tapped the rear of a backmarker and badly damaged the left-front of his Huracán machine. That allowed Giannoni to close back on Roda as the leader was struggling with his damaged car.

On lap 24, Giannoni attempted a move at Vallelunga’s final corner – named after the nearby capital Roma – but Roda held on.

As they approached the braking zone of Turn 4 on lap 25, Giannoni dived to the inside, but at the last moment Roda turned into his rival, causing the leader to spin out of contention.

After running fourth early on, the Dorr Motorsport pairing of Scholze and Lauck were up to third after the pitstops. After watching Giannoni and Roda tangle at Turn 4, Lauck was able to seize his chance and take over the lead of the race.

Giannoni recovered to second, but Roda struggled to resume to the race track and fell to the tail of the field. Giannoni finished three seconds behind Lauck at the flag and four seconds ahead of early leader Solieri.

Konrad’s Christopher Bruck (sharing with Carrie Schreiner) finished fourth just 0.1s ahead of Jake Rattenbury and Aleksander Schjerpen. That was despite a time penalty for both runners. Bruck was given an 11 second time penalty for an on-track clash, while Rattenbury’s was for a pitstop misdemeanour.

Frenchman Ange Barde was sixth ahead of the VS Racing pairing of Piero Necchi and Andrzej Lewandowski.