The Dane, who shared the #31 Target Racing srl machine with Jonathan Cecotto, won Saturday’s opener ahead of Mitchell and Amici’s Prestige Performance/Wayne Taylor Racing Huracan, with the places reversed in Sunday’s second race.

Schandorff alone is crowned world champion in the Pro category on countback when race victories in the regional championships were taken into account. His six Middle Eastern wins versus Amici and Mitchell’s three in North America ultimately proved the difference.

In the Pro-Am class, Imperiale Racing’s Karol Basz and Andrzej Lewandowski came out on top in a thrilling end to the second race to secure the title.

Teenager Steven Aghakhani dominated the Am class all weekend, taking both victories from pole in the #106 US RaceTronics car, while Supercross star Chad Reed won the Lamborghini Cup.

Schandorff and Cecotto took pole for the opening race and duly led from the rolling start, with Precision Performance Motorsport’s Conor Daly slotting ahead of Amici for second at the first corner.

Bonaldi Motorsport’s Jack Bartholomew made contact with the Hojust car of Afiq Ikhwan Yazid at Turn 3, with the latter being joined in the gravel by the ArtLine Team Georgia car of Harald Schlegelmilch.

That brought out the safety car but the order remained largely unchanged up front at the restart.

Schandorff built up a 1.782s advantage ahead of the mandatory pit-stops, but Mitchell – having taken over from Amici – leapfrogged Daly’s teammate Brandon Gdovic into second.

Mitchell then spent the remaining 20 minutes of the race hounding the back of Cecotto.

The #101 Prestige Performance car got close on several occasions, but Cecotto astutely defended the inside line at Dry Sack and at the final corner to hang onto victory by just under a tenth of a second.

Race two was a tense affair, with Mitchell starting the #101 alongside the pole-sitting Pro-Am Van der Horst Motorsport car of Loris Spinelli.

Mitchell was pushed out of second at Turn 1 by the faster-starting Alberto di Folco in the second Target Racing car.

The leading five at the front all made their mandatory stops within the first four minutes of the 10-minute pit window opening, with Amici getting past Di Folco’s teammate Davide Venditti for the de facto race lead.

Cecotto trailed the #101 in the opening stint but Schandorff re-joined second – despite a 0.336s time penalty after going under the minimum pit-stop time – to Amici after the window closed, tying both crews on points. 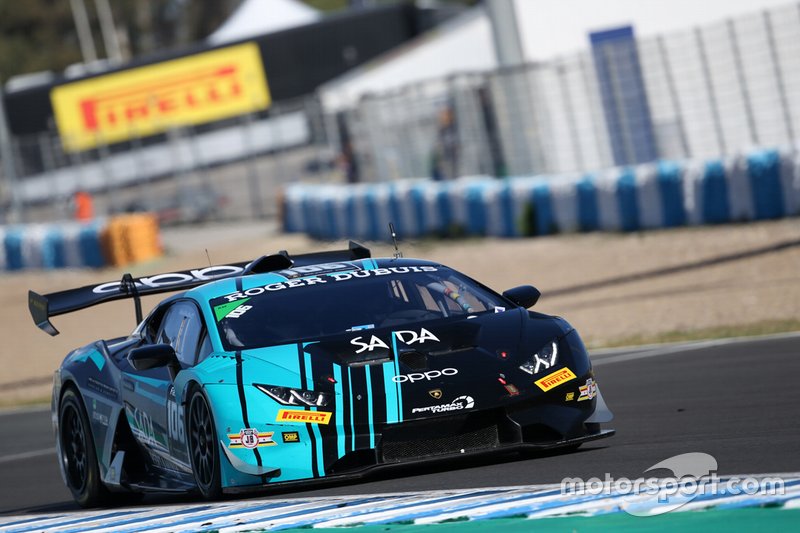 Having taken a pair of class wins in the North American finale on Friday, Aghakhani was again unstoppable in the combined Am/Lamborghini Cup double-header.

The 16-year-old was untroubled in the first encounter and headed Change Racing’s McKay Snow, who profited from a late-race spin for second-placed Gilles Vannelet (AGS Events).

Vannelet provided a sterner threat to Aghakhani in the second race and led the opening stint from the American before handing over to teammate Nico Gomar.

Aghakhani was at times more than a second a lap quicker than Gomar, and easily took the lead after his mandatory pitstop.

Gomar, then went off track at Turn 10 which allowed Leipert Motorsport’s Jake Rattenbury – driving solo after teammate Mikko Eskelinen damaged his ribs in a heavy crash during the European races.

That relieved the pressure on Aghakhani, who took the victory by just over five seconds.