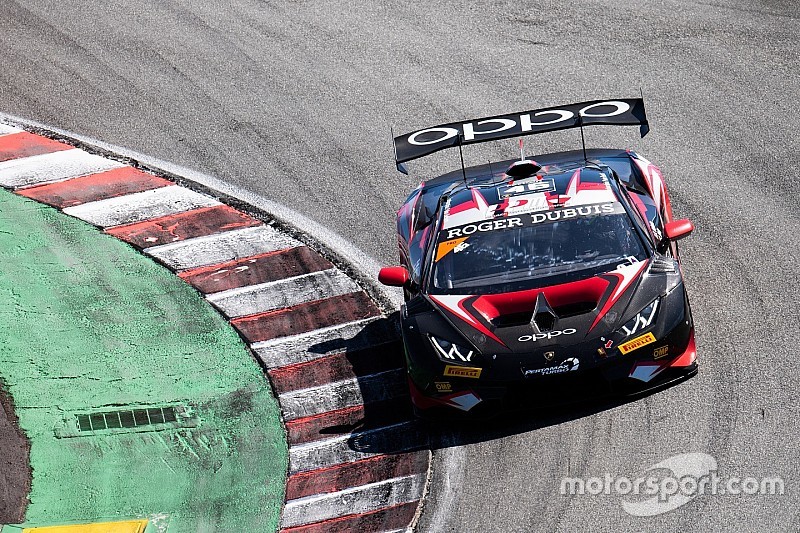 Precision Performance Motorsports' Brandon Gdovic moved to within just six points of the lead of the Lamborghini Super Trofeo North America title after a double win at Laguna Seca.

Gdovic, who shared the #46 Huracan with IndyCar Series regular Conor Daly, got the better of the championship-leading Change Racing pairing of Richard Antinucci and Corey Lewis to close up the title race ahead of the World Finals at Jerez next month.

The #1 Prestige Performance/Wayne Taylor Racing partnership of Sandy Mitchell and Andrea Amici recorded a brace of podium finishes to head into the season-finale a further six points adrift of Gdovic.

Antinucci took the #29 Change Racing Huracan to pole position for Saturday’s opening encounter and led the early stages from Gdovic.

The #1 Prestige Performance/Wayne Taylor Racing car of Sandy Mitchell suffered a poor start and dropped to fifth by the first corner and was embroiled in a lively fight for fourth with teenager Steven Aghakhani (US RaceTronics).

Mitchell got past Aghakhani’s Am class machine on the tenth lap before profiting from a mistake from Cedric Sbirrazzuoli’s PPM car as the Monegasque ran wide on the exit of Turn 5.

Gdovic was the first of the leaders to make his mandatory pit-stop as the window opened, while Antinucci waited a lap later to bring the #29 in.

An overshoot meant that Antinucci’s car had to be brought back into the pit box when changing over to Corey Lewis, a timely error which handed the #46, now in the hands of Daly, the de facto lead after the window closed.

Daly, Lewis and Andrea Amici were then nose-to-tail as the race entered its closing stages, with Lewis pushing the IndyCar regular all the way to the flag.

The pressure did not affect Daly in front, and the #46 took victory by a fraction of a second from Lewis, with Amici completing the Pro podium in third.

On pole for Sunday’s second race, Daly made the best of a delayed start – caused by Jonathan Hirschberg crashing before the green flag – to lead away from Lewis’ #29 machine.

Lewis was the faster of the leading duo and made a huge lunge down the inside of Turn 1 to seize the lead from Daly ahead of the pit-stops.

The pair came in together and this time it was the #29’s turn to lose out on exit.

Things got worse for the Change Racing team as Antinucci was handed a drive-through penalty due to their stop being more than one second under the minimum 84-second pit stop time.

The #46 was also under the minimum time, but was only handed a 0.234s penalty as Gdovic, having taken over from Daly was less than one second faster.

This meant that Gdovic was free to take a second victory in as many days, but was chased all the way by the #1 of Mitchell, who also received a penalty.

The #1 was pinged five seconds post-race after Amici was too eager at the rolling start, but held onto second place at the end.

Antinucci was on a mission following his penalty and made inroads into the deficit by setting a series of fastest laps en route to a well-earned third place to limit the damage in the title race.

Jacob Eidson and Damon Ockey wrapped up the Pro-Am title following a superb weekend in the #09 US RaceTronics Huracan.

The pair backed up their race one victory with a front-row start for Sunday’s second race and ran Gdovic and Lewis close in the early stages.

Eidson assumed the lead during the pit window and was the last of the front-runners to pit as the window closed. Ockey took over and finished a strong seventh overall, beating Patrick Liddy and former GP2 Series race winner Dani Clos.

Aghakhani had held the advantage in the opening race, despite a brake issue in qualifying, but suffered a half spin coming through the Corkscrew with 15 minutes of the 50-minute race remaining. A further spin made sure of Sofronas’ victory.

The pick of the action on Saturday was the Lamborghini Cup class battle between eventual race winner Justin Price – sharing the Dream Racing car with Supercross rider Chad Reed – and the #43 Prestige Performance/Wayne Taylor Racing car of Ashton Harrison and Stephanie Cemo.

Harrison had the better run coming out of the final corner and just missed out on victory by just over a tenth of a second.