Chris van der Drift and Evan Chen moved to within two points of the Lamborghini Super Trofeo Asia points lead after recording a fifth win of the year at Shanghai International Circuit.

The Gama Racing pair came into the weekend four points adrift of FFF Racing’s Juuso Puhakka and Takashi Kasai, a gap which stretched to seven as a pit-stop penalty left them a lowly fifth place in race one.

But victory in Sunday’s second encounter means the title is evenly poised ahead of the World Finals at Jerez next month.

Having topped qualifying on Saturday, the Pro-Am Hojust entry of Afiq Ikhwan Yazid led away off the rolling start from Puhakka and Nato before Clarebold Chan brought out the safety car.

Yazid again got the jump on Puhakka at the restart and maintained the lead over Puhakka, Nato and Chen as the mandatory pit-stops approached.

The leading quartet all elected to stay out as the window opened, with Nato the first to come in to hand over to Jousse.

Van der Drift brought the #68 in soon after and changed with Chen, but the Gama Racing stop was deemed to be under the minimum pit-stop time and was subsequently penalised.

Chen emerged from the stops just half a second ahead of Jousse, with the Frenchman pressuring the #68 for the lead.

Jousse eventually found a way past and quickly built an unassailable lead over Chen, who crossed the line in second but would ultimately drop behind both Puhakka/Kasai as well as Yazid/Ochiai to fifth overall and third in the Pro class.

Jousse took pole for Sunday’s second encounter but was beaten into Turn 1 by the fast-starting Chen, who built a two-second lead in the opening stint.

Chen was not allowed to escape out in front however and Jousse shadowed the #68 all the way to the pit-stops.

After taking over from Chen, van der Drift quickly opened a six second advantage over Nato, with the Kiwi comfortably taking the flag by 11.008s.

Behind Nato was Kasai and Puhakka who recovered from a slow start in the #63. Kasai dropped to sixth overall but the pair worked their way back up the field to complete the podium, albeit with a reduced championship lead.

Ochiai and Yazid finished fourth overall and claimed another Pro-Am triumph to boost their title aspirations, while Massimo Vignali and Brendon Leitch ended up fifth.

Having finished a distance runner-up to the sibling pairing of Saruvat and Sarun Sereethoranakul in race one, solo entrant Huilin Han scored a narrow Am class victory in the second race, beating Angelo Negro/Zen Low (Aylezo Motorsports) by just three-tenths of a second.

This was only after Han was given a drivethrough penalty for his part in contact with Sarun, which put the latter out of the race

There was an even bigger battle in the Lamborghini Cup class as GDL Racing’s Tony Walls prevailed in an epic fight for second with Takamichi Matsuda.

Matsuda, second in the points, had looked the faster of the two and was all over the back of Walls in front. But a small error in the closing stages allowed Walls to secure the position as GDL teammate Gabriele Murroni claimed the class triumph. 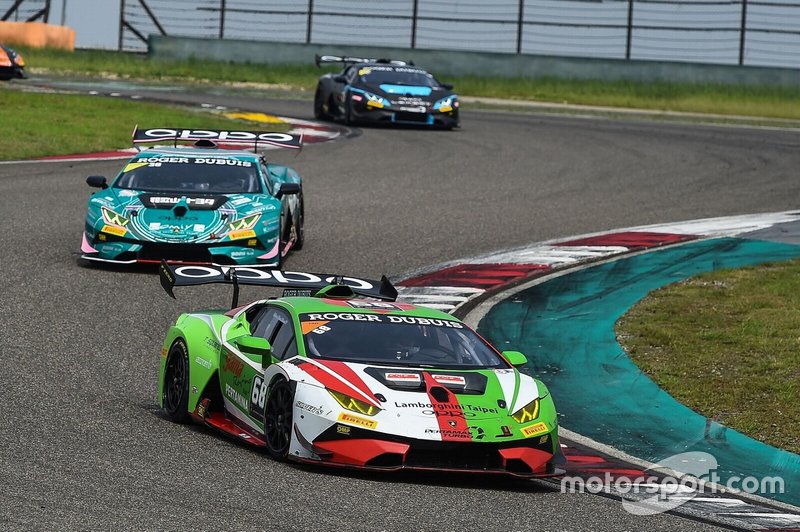