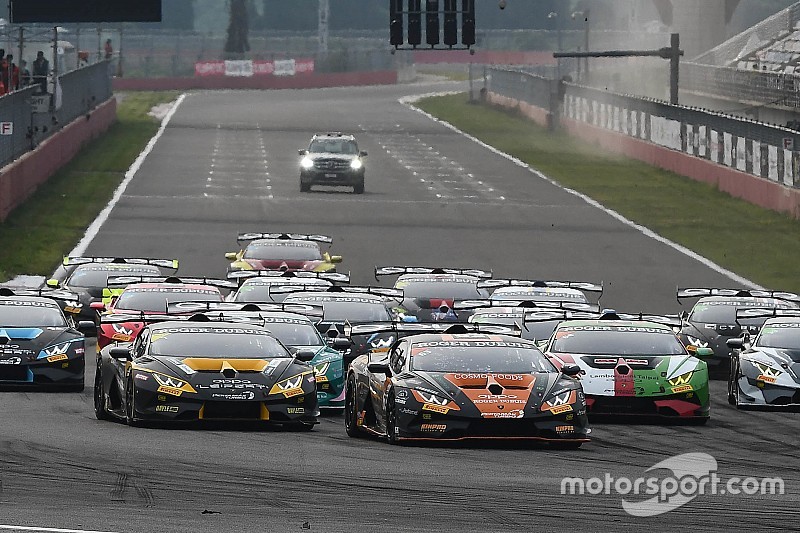 Puhakka got away well from the rolling start in race one to lead Leipert Motorsport’s Brendon Leitch into the first corner.

Toyota Racing Series regular Leitch then ran wide after a snap of oversteer at the fast Turn 7, dropping the Kiwi to third behind Chen.

Puhakka made the most of clear air in the opening stint and built a 6.675s margin over Chen as the pit window loomed. The Finn made his mandatory stop with 21 minutes remaining, handing over to Kasai.

Chen brought the #68 Huracan in one lap earlier, handing over the commands to van der Drift, who immediately began eating into Kasai’s lead once the window closed.

Van der Drift cycled out just sixth-tenths of a second behind Chen and made a decisive move for the lead on the inside of Turn 14 with 13 minutes remaining.

From then, van der Drift was unchallenged and stretched his legs to end up 5.712s clear of Kasai at the finish, with the Pro-Am pairing of Toshiyuki Ochiai Afiq Ikhwan Yazid rounding out the podium finishers.

Van der Drift and Kasai initially made little progress from third and fourth on the grid respectively, as Yazid handed over to teammate Ochiai at the pit stops.

Ochiai maintained the lead in the #63 car but fell into the clutches of the charging Chen in the second stint.

The Hojust Racing driver’s lead came down from over five seconds to just 2.004s heading into the final couple of minutes.

Ochiai then locked up and ran very wide at Turn 1, which allowed Chen to close right onto the back of the Japanese driver.

Chen then dived down the inside of Turn 10 in a repeat move from Saturday’s race to grab the lead. Ochiai fought back at the next corner and the pair made slight contact, which then enabled Puhakka to seize the advantage on exit.

Puhakka then made sure of his and Kasai’s first overall win of the win with a solid final lap, to head Chen by 0.791s at the line.

Ochiai had to make do with third place, but took the maximum Pro-Am points.

Brendon Leitch was fourth ahead of the Daniel Stutterd/Richard Muscat combination which had been running second until a spin with 15 minutes remaining.