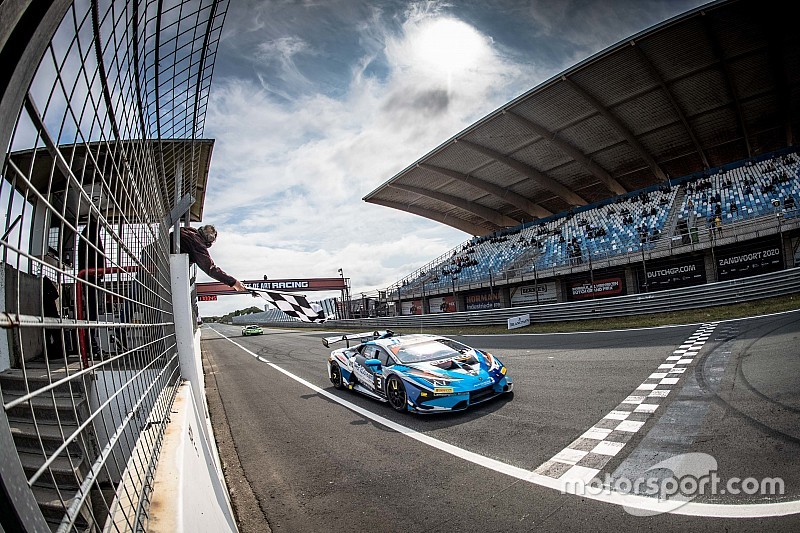 Local favourite Kroes stormed to pole position by nearly half a second from points leaders Kikko Galbiati and Vito Postiglione in the #44 Imperiale Racing Huracan as heavy rain affected the bulk of the weekend.

Kroes led off the rolling start and took a lead of two-and-a-half seconds ahead of the mandatory pit-stop window.

Galbiati had to defend second place from Imperiale teammate Karol Basz in the opening stint, with the latter opting to stay out in clean air as Gabiati pitted at the start of the window.

Bartosz Paziewski took over from Basz in the #8 and rejoined fractionally ahead of Postiglione into Tarzan.

But a snap of oversteer rounding the high-speed Shievlak corner with nine minutes remaining cost Paziewski a podium finish and set Postiglione free in pursuit of the #3.

Kroes opted to take his pit-stop towards the end of the window and swapped with Afanasiev with 24 minutes left.

The Russian maintained a healthy lead once the window closed but lost over two seconds after running too deep at the “S” Bocht chicane in the latter stages.

This allowed Postiglione to reduce the deficit to just under half a second by the finish, with the #3 just clinging on to secure a first win of the season.

Sunday morning’s second encounter was wet from the start.

Series newcomer Kang Ling was the star of the show in the Pro-Am class, qualifying a superb seventh alongside the #21 GT3 Poland car’s regular driver Grzegorz Moczulski, and running eighth in the opening stint.

A spin for Ling ahead of the pit window gave the recovering ArtLine Team Georgia car of Harald Schlegelmilch the advantage in the second half of the race, with the Latvian and co-driver Shota Abkhazava fighting through from 13th to take the win.

The #3 again started from pole, thanks to Afanasiev’s Q2 effort and led into Tarzan from Postiglione.

Schlegelmilch briefly held third around the outside of the corner but Middleton maintained his starting position and proved to be the quickest as the rain intensified.

Having survived a huge oversteer moment at Shievlak, Middleton began to reel in Postiglione, and pulled off a superb round-the-outside move at Masters to seize the lead with 25 minutes remaining.

Schlegelmilch and Postiglione, who alongside Middleton had begun to break clear of the chasing pack, pitted immediately, while the 32 stayed out.

Middleton and Afanasiev were the last of the leaders to make their mandatory stops, with the Russian closing to within two seconds at the end of the stint.

Target Racing srl’s di Folco had been in the mix early on, challenging Postiglione for the lead until he ran straight on at the exit of Shievlak, dropping to 13th.

His co-driver Davide Venditti eventually put an end to the team’s misery by bringing out the safety car after spinning into the barriers at Hugenholtz.

Just two laps were completed after the restart before the safety car was deployed again as Galbiati spun out of third place at the “S” Bocht chicane.

This left just two minutes left on the clock, with Kroes fending off a late attack from Middleton's teammate Jack Bartholomew to complete the double, with the #66 Micanek Motorsport Huracan of Jakub Knoll and Josef Zaruba claiming a surprise podium finish as Paziewski dropped back.

The #8 finished fourth ahead of the Pro-Am winner Abkhazava.

Robert Zwinger (GT3 Poland) and Nico Gomar (AGS Events) shared the Am class victories, with each only being settled in the closing laps.

Zwinger hanged on to win Saturday’s first race by just 1.102 seconds from local interlopers Mathijs Bakker and Paul Harkema in the first race.

Gomar edged Bakker in the second race by less than a quarter of a second after long-term leader Antonios Wossos was given a drivethrough penalty for speeding in the pitlane. 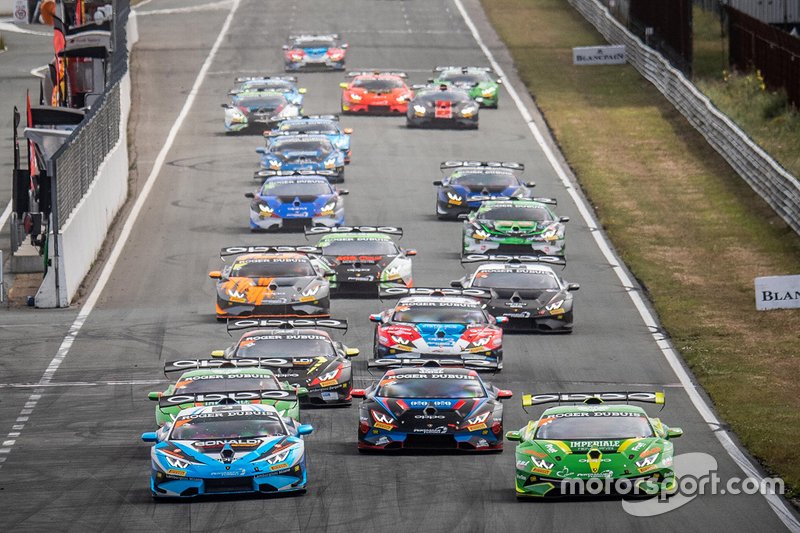