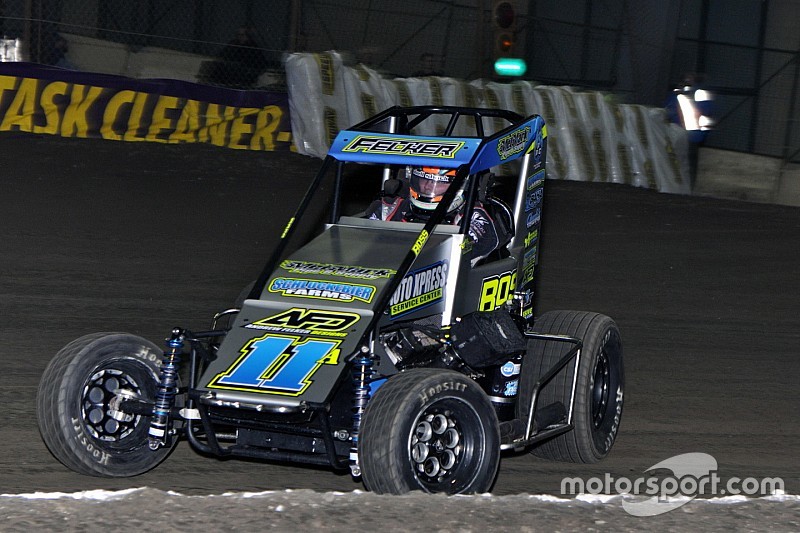 Andrew Felker didn’t know whether he would even make it to Saturday’s Chili Bowl Nationals races after taking a wild ride during hot laps at Tulsa Expo Raceway on Monday.

The team and driver of the No. 37 A.J. Felker midget —no relation to A.J.—completely rebuilt the car before Friday’s preliminary events, but not without incident. At the chassis shop he chose for the repairs, the car slipped out of the restraining braces and actually flipped off the table while it was being straightened.

But with hard work and patience, Felker was not only able to race on Friday, he was able to lock himself into the 32nd Annual Lucas Oil Chili Bowl Nationals.

“When we got the car stripped down here, it was down to the bare frame on Monday night—Tuesday morning,” Felker said. “I didn’t even think I’d be able to race. Just getting it back together again straight, because the cage was bent back the other way three inches. So, it was torn up pretty good. I think most of the people would have put it to the side and called it quits. But they straightened out good.”

Felker started second and finished second in the fifth heat race. He held off Kasey Kahne to win the third Qualifier then lined up 11th for the A-Feature.

“Hot laps, I really didn’t have the confidence in the car,” Felker said. “But I’ve always had a lot of success here running around the berm—like we did in the feature. In the heat race, I was just trying to get my feet underneath me to use the berm to our advantage. I finally got comfortable and once we started rolling in the feature, I knew we were good and got to seventh or eighth.

“I thought, well this is doable. This is B-Main range come Saturday. It seemed every time I got behind somebody, they’d sail up to the top and give up the bottom and it kept opening up the lane for us. I thought I was going to need the yellow at the end to get the field bunched back up.”

Felker moved up to fifth in the first 15 laps. In the final five laps, he passed Damion Gardner, who led 12 laps, and Kahne to capture the third and final transfer spot for Saturday’s A-Main. Although Felker raced his way into the show in 2013, this year marks his first time he advanced from his preliminary night performance.

“We were fifth with five to go and Gardner was a straightaway ahead of us,” Felker said. “He was actually on the bottom. I thought we could get to him but how are we going to pass him? It seemed like I gained a straightaway or a half of a straightaway there in about one lap. As soon as I got to him, he moved up and opened the lane for me.”

Felker grew up in Carl Junction, Mo., a suburb of Joplin, but started racing micro midgets around Tulsa and Claremore, Oklahoma. In 2017, Felker finished sixth in the POWRi Lucas Oil National Midget standings.

Although he currently lives in Sedalia, Mo., Felker considers this area home. Although the composition changes every year for the Tulsa Expo Raceway, Felker is at ease in these surroundings. On Saturday, he’ll come from 12th—his best career starting place in the A-Main.

“I have plenty of laps here in the (Tulsa) Shootout,” Felker said. “This is my 11th Chili Bowl. I have a lot of laps around here. Hopefully, it works out for us. I have no expectations. We already reached our goal getting to the A-Main. And that’s special. It’s all fun and games now.

“I’m definitely the underdog going into this with all these powerhouse teams here. We’re just one of the little guys.”