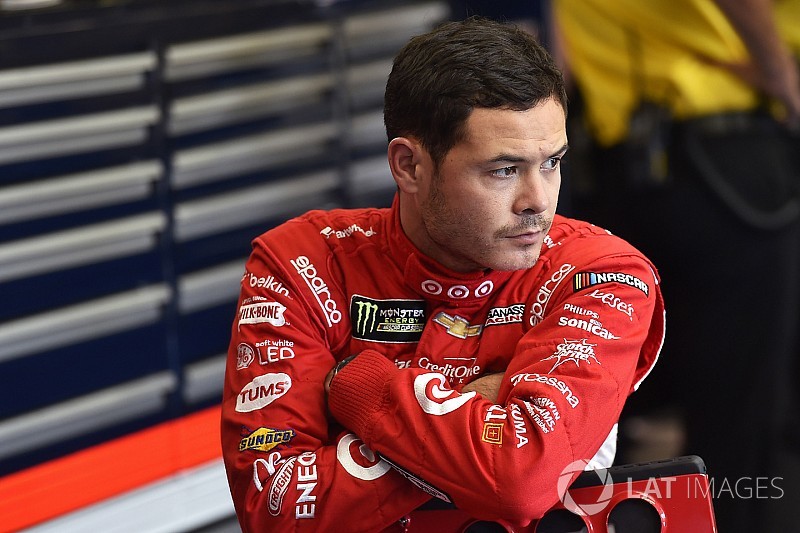 As the dust started to clear at Tulsa Expo Speedway and Christopher Bell finished his post-Chili Bowl Nationals celebration with his winning Keith Kunz Motorsports team, Kyle Larson was back in the pits signing autographs.

Larson, who started from the pole for the 32nd-running for the holy grail of midget racing, was already in his street clothes after his midget blew up on Lap 42 with 13 circuits remaining in the race.

Despite his disappointment, Larson hadn’t lost his sense of humor.

“It’s tough to blow up,” Larson told Motorsport.com. “It always is. I kind of dealt with it a few months ago. So I’m kind of used to it now.”

Coming off of his best season with Chip Ganassi Racing in NASCAR’s Monster Energy Cup Series, Larson won a career-high four times during the regular season and remained in the top-three in the standings. His Playoff performance, however, was marred two engine failures and two wrecks in a four-race span over the last five races of the season.

A week of perfection

But Larson brought his A-game to the Chili Bowl Nationals. He sharpened his skills Down Under—winning three of the four midgets races he entered in New Zealand prior to returning to the United States last week. On Tuesday, Larson finished second in his heat race, won the qualifier and then crossed the line second to Chad Boat in the Vacuworx Invitational Race of Champions before winning the A-Feature.

On Saturday, he snookered Bell in the Pole Shuffle to start first of the 24 contenders in the A-Main.

“That shocked me, really shocked me,” Bell told Motorsport.com. “I got to watch the first couple (rounds of the Pole Shuffle). The bottom was where you had to be. So I just went in there and made sure I didn’t slide up off the bottom. I was on the berm. The next thing I know, he’s inside of me on the berm.

“That was a rude awakening. I didn’t expect that. Once he knocked me off the bottom, I knew I had no option other than to go to the top. Once I got around the top in (Turns) 3 and 4, really good, I tried to get in front of him and spun myself out.”

While Bell could laugh about the incident after the fact, and was still thoroughly embracing the magnitude of back-to-back Chili Bowl wins in the event he grew up revering, the 23-year-old Norman, Oklahoman was somewhat disappointed. Throughout the week, the feature was stacking up to be a showdown between the KKM drivers—Bell, Larson and Rico Abreu.

Robbed of a true battle for the win

Larson led the first nine laps before Bell moved to the point for 16 circuits. Larson came back around on Lap 26 as Bell hit lapped traffic. He held the lead until his engine began to lose power on Lap 41. Bell inherited the lead and held on for the win.

“But I’d rather be lucky than good any day.”

Bell celebrated his 46th career National Midget win—the most ever for any Toyota driver. In the aftermath, he was more concerned about the fans. He had heard the “sour pitch” in Larson’s engine before it blew. After that, he rode it out to the end. With a 3.162-second lead over Abreu at the finish and nine cars remaining on the lead lap, did the outcome live up to the expectations?

“That’s the health of the Chili Bowl. If the fans leave here disappointed…I like to see the crowd get into it. That’s what makes this event so special, how the crowd gets into the racing. It’s extremely important to me that they leave here excited to come back.”

Bell, the 2017 Camping World Truck Series champion, will now turn his focus to NASCAR’s Xfinity Series with Joe Gibbs Racing. After winning 12 of his last 15 midget starts, he will shelve his open-wheel exploits until at least March to concentrate on the No. 20 Xfinity team.

Larson will compete in sprint cars at Volusia (Fla.) Raceway prior to the NASCAR season kicking off with Speedweeks at Daytona International Speedway. While this year’s Chili Bowl experience ended in heartbreak, he felt the racing surface was better than it had been in the last few years.

“They typically work the whole track—bottom all the way to the top,” Larson said. “This time, they left the middle so it got slicker, faster, earlier in the race, which was good. There were a lot of good cars, so it tends to get single-file a little bit at times.

“But I thought traffic was good in the middle portion of the race—when I got the lead—and it would have been good at the end there, too.”

Unfortunately, Larson never got the opportunity to find out. Neither did Bell or the race fans. Perhaps the anticipation of a fully contested rematch will give Chili Bowl enthusiasts another reason to return in 2019.

Up in smoke? The NHRA at a crossroads