Chili Bowl: Is this the year Larson brings home the Golden Driller? 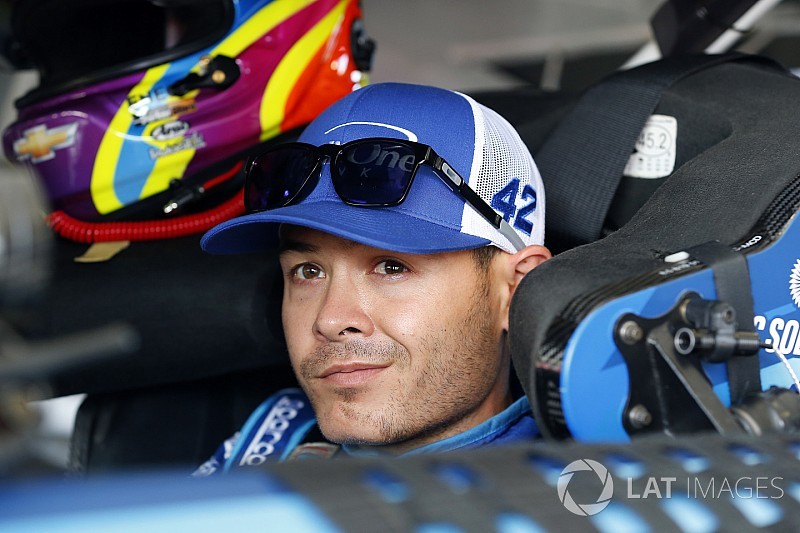 After winning three of four races Down Under, Larson feels he’s in the best shape to tackle the Super Bowl of midget racing.

The experience sharpened a skill set the 25-year-old Elk Grove, Californian doesn’t use as much as he’d like.

“I got to stare at Sunshine’s rear bumper a lot,” Larson said of Tyler Courtney, whom he raced against in New Zealand and who finished third in Tuesday night’s A-main preliminary feature at Tulsa Expo Raceway. “Then he would have bad luck and then I would win. That was good. Just getting laps. I don’t race a lot of midget stuff throughout the year. Obviously, I have my NASCAR stuff. I fill in most of my other racing with sprint cars. I run a few midget races throughout the year. But I feel like I’ve run less and less of ‘em throughout the last few year, I’ve gotten worse and worse here.

“I wanted to go to New Zealand to just get as familiar as I could back with the midget, and I think it’s paying off so far. I’ve still got one night to go on Saturday to try and put everything I’ve learned into motion.”

If Tuesday night’s results were any indication, the 25-year-old Elk Grove, California native might be in the fast lane for his first Golden Driller in six attempts. Larson finished second in his heat race, first in his qualifier, second in Vacuworx International Race of Champions and won the A-Main preliminary.

“This race is kind of big-picture racing,” Larson said. “Once you get towards the front, there’s a lot on the line. I made a mistake last year and it cost me an A-Main starting spot for Saturday. I just wanted to be careful.”

Keeping it in the family

For Larson, who drives the No. 42 for Chip Ganassi Racing full-time in the NASCAR Monster Energy Cup Series, this year’s Chili Bowl Nationals has a throwback feel to it. He’s driving for his father, Mike Larson, an opportunity he hasn’t had since he was an aspiring racer.

“It’s really cool to get to race for my dad again,” Larson said. “It looks like I’m racing for Keith Kunz—which I kind of am. But my dad is the owner of it. Keith just kind of takes care of it. This is now the third year he’s entered a car in it. Shane Stewart ran the first year, then Sheldon (Haudenschild) last year. They kind of had some bad luck and didn’t run very good. I could tell he was a little down and upset about that.

“A few months ago, I was like, ‘Man, why don’t I just race for you.’ I didn’t know he made a deal with Keith and (co-owner) Pete (Willoughby) that he would not take me—ever. So he made me tell Keith and Pete that I’d like to race for my dad. That was a little nerve-wracking, but they approved it and let me run for my dad, which was cool. To get a win, again here, was special, but hopefully to get a Driller for him and myself would be special.”