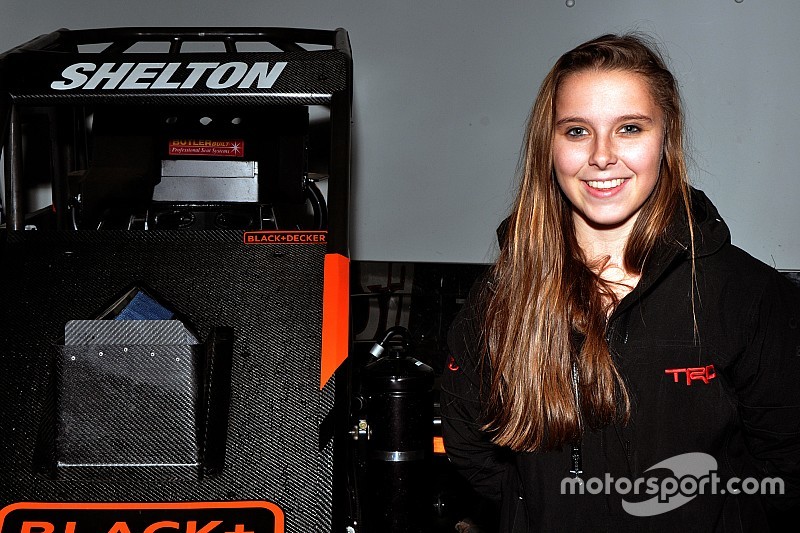 Holly Shelton doesn’t aspire to be the next Danica Patrick.

Shelton is making her Chili Bowl Nationals debut this weekend. The Gold River, Calif., native was fast-tracked through Toyota upon the recommendation of Kyle Larson. When Shelton blew by Larson and Ricky Stenhouse Jr. in an outlaw kart race at Cycleland Speedway in Chico, Calif., two years ago, Larson wasn’t surprised once he realized who was behind the wheel.

“She won like eight races before then, so I wasn’t surprised at all,” Larson said. “She’s really good. I’ve known Holly for a long time — since she was like 12-13-years-old. And then she started racing outlaw karts. She does a really good job at that. She’s probably the best outlaw kart, female racer on the West Coast.

“When I heard about Toyota wanting to do stuff with female racers, she was the first person I thought of and recommended. She doesn’t come from a wealthy background at all, and she’s a great race car driver, so I thought she would be good.”

Shelton grew up in racing. Her father Larry was a sprint car crew chief, and by age 7, Shelton was wheeling go-karts at an indoor track in Sacramento.

Last year she was recruited by Toyota and placed in the Keith Kunz Motorsports stable. In her rookie season, Shelton finished seventh in the USAC National Midget standings.

“The car is absolutely perfect every night, so the driver just has to show up — no excuses,” Shelton said. “At the beginning of the year to the end of the year, it was a big improvement.”

Although Shelton currently lives in Indiana, the 21-year-old Criminology student balances her studies online from California State University, Sacramento with racing on the weekends.

“During the week I’ll go to the shop and then I’ll come home and do some homework,” Shelton said. “Sometimes I’ll forget about my homework. It’ll be a race day and I’ll be up to midnight. You can find me in the lounge or the trailer catching up with my homework before I go out to hot lap.”

This weekend, Shelton will team up with Larson as well as Christopher Bell, Rico Abreu, Tanner Thorson, Spencer Bayston, Sheldon Haudenschild and Ryan Robinson. She is one of 77 rookies in the field, but with the wealth of experience among the her teammates, Shelton has caught on quickly. During her qualifier on Thursday, Shelton came from seventh in the fourth Qualifying Race to finish second and transfer into the A Feature.

As for her expectations, Shelton would like to move up to the top of the alphabet on Saturday.

“I just want to get some experience,” Shelton said. “Put some laps together. I’ve learned a lot from my teammates and by watching them. To make a higher up Main — C, B, A — would be ideal.”

Tony Stewart to run over 70 races this year