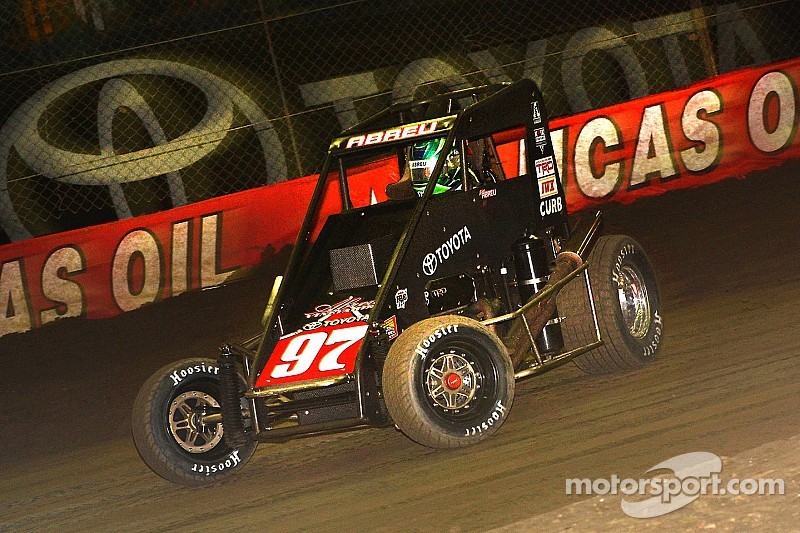 The 2014 USAC National Midget Champion, who turns 23 on Jan. 30, won each of his qualifiers throughout the week, then drew the third starting spot for the A Main on Saturday.

“It’s pretty damn cool,” Abreu said of his accomplishment. “Not too many people get to win the Chili Bowl. There’s a short list up there with only a few names on it. It’s just an unbelievable event. There’s such prestige and so much build up behind this event, it cracks a lot of people.

“So, it’s cool to win this thing and cool to know that your name will be up there forever.”

The 2014 USAC National Midget Champion won each of his qualifiers throughout the week, then drew the third starting spot for the A Main on Saturday.

Defending event winner Bryan Clauson took the lead at the start and remained at the point for the first 26 laps. But when Christopher Bell spun out on Lap 22 and the field was bunched up under the fifth caution, Abreu was able to catch Clauson. He took the lead on the inside in Turn 2 on Lap 27.

Although the 55-lap race was slowed by three additional cautions, including Clauson who was collected when polesitter Jerry Coons Jr. stopped in Turn 1, Abreu held on to take the checkered flag as the crowd erupted into a chant of “RICO! RICO! RICO!”

I knew it was going to be tough. I just made sure that every pass I made counted.

“I just tried to stay patient as I could,” Abreu said. “It’s a long race. It’s not a long race – but it is a long race. So for a few laps I just got after it to see where we were at and I hung with him (Clauson) pretty good. I don’t know how hard he was racing, but when the time was right, I pulled the trigger and gave him a slide job. He tried to slide me back and we drag-raced into (turn) three and I came out into the lead.

“Yellows played out the right way and we got the traffic. I knew it was going to be tough. I just made sure that every pass I made counted.”

After taking a Polish victory lap, Abreu stopped the No. 97 Keith Kunz Motorsports midget in between Turns 3 and 4 and was quickly surrounded by a crowd of well-wishers.

“It’s a dream come true,” Abreu said after earning his first Chili Bowl win. “I’m so fortunate to be able to drive for Keith.”

It's no fun to even run second any more.

"You come here four years in a row and leave here as the winner, and sit in that middle chair," said Swindell, who also finished second in 2014. "It's no fun to even run second any more.

"We had a great car but somebody else's mistake really put us behind the eight-ball at the beginning. I did all I could to get back, but Rico was really good at the end."

For team owner Kunz, whose teams have won four of 29 events, the victory ended a 12-year Chili Bowl drought dating back to his win with Tony Stewart in 2002. On Saturday night, four of Kunz’s Toyota-powered midgets made the A Main. The victory was the first CBN win for Toyota Racing Development.

Over the years the Columbus, Ind.-native has assisted the careers of Stewart, Kasey Kahne and Kyle Larson, but calls Abreu “an exceptional talent – and he’s just getting better.”

(Rico) never made a mistake – not once. And that’s what it takes. You have to be flawless to pull this one off.

“People don’t realize that he never drove anything until about five years ago,” Kunz said. “It’s only like his third year in a midget. He doesn’t have the years of experience that most of these guys have. And it’s a hard one to win. There’s just so many good guys – there are like 10 guys that are really, really good. It’s just hard.

“But Rico is unbelievable. He drove the perfect race. This weekend is probably the best I’ve ever seen him. He won every time he was on the track this weekend. He won every race, qualifier, prelim and then tonight. Never made a mistake – not once. And that’s what it takes. You have to be flawless to pull this one off.”

And Abreu, who has won 25 of 105 races, is proving his staying power and quickly becoming one of the most popular drivers on the circuit. Long after midnight, Abreu signed autographs outside of his transporter.

Abreu was humbled by the fan response.

“It’s just unbelievable to build a fan base here at the Chili Bowl,” he said. “I’ve been coming here for five years racing and to hear the crowd cheer is pretty cool. You win this thing a few times and they start booing you, but it’s good that they’re cheering.”

Stenhouse happy for Clauson, ready to take on Chili Bowl