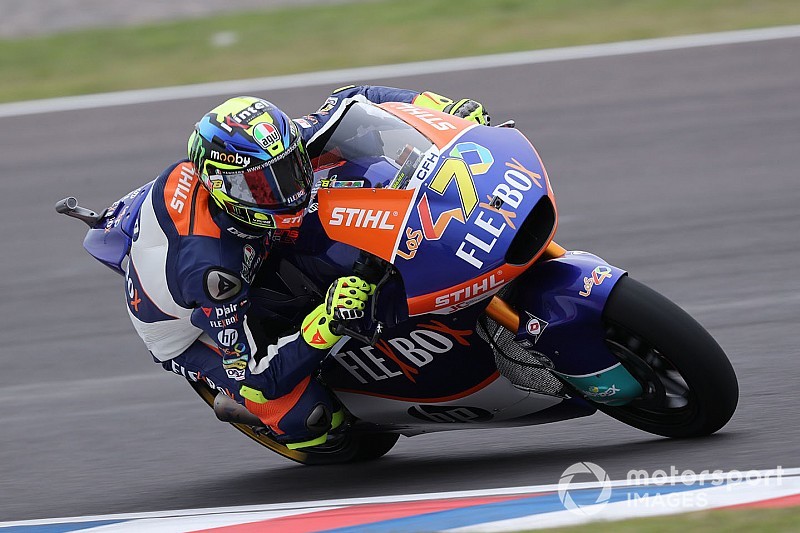 Lorenzo Baldassarri continued his perfect start to the 2019 Moto2 season with victory at Termas de Rio Hondo, passing Remy Gardner for the lead in the latter stages.

SAG rider Gardner, son of 1987 500cc champion Wayne, led for much of the race after passing Marcel Schrotter (Intact GP) to grab the early advantage on lap two of 23.

After resisting a challenge from Schrotter on lap six, Gardner also saw off Alex Marquez on lap 11, repassing the Marc VDS rider at Turn 7 after relinquishing the lead at Turn 5.

Schrotter then passed Gardner on lap 12 to enjoy a spell out front, but was demoted again by the Australian rider at Turn 5 four laps later.

Shortly after, Baldassarri, having picked off Marquez, moved clear of Schrotter for second, and then caught up to the back wheel of Gardner.

On lap 20, the decisive move of the race came at Turn 5, as Baldassarri gently nudged Gardner out of the way at Turn 5 to grab a lead he wouldn't lose.

Gardner ran wide and dropped to third behind Schrotter, but managed to grab the position back before the German slipped down the order, scoring his first-ever podium.

Schrotter ended up sixth after his late slump, ahead of Luca Marini (Sky Racing VR46), who lost out on the last lap running wide at Turn 7 while scrapping with Binder.

Jorge Navarro (Speed Up) and a pair of rookies, Enea Bastianini (Italtrans) and Somkiat Chantra (Team Asia), completed the top 10.

Qatar runner-up Tom Luthi (Intact) was an early retirement as he crashed after tagging Binder's rear wheel during the early exchanges.

Poleman Xavi Vierge (Marc VDS) didn't even make the start of the race as his bike shut down on the warm-up lap.

UPDATE: Binder was given a one-position penalty for "riding in an irresponsible manner", the South African making contact with Schrotter at Turn 3.

He dropped down to sixth as a result, with Schrotter gaining a position.