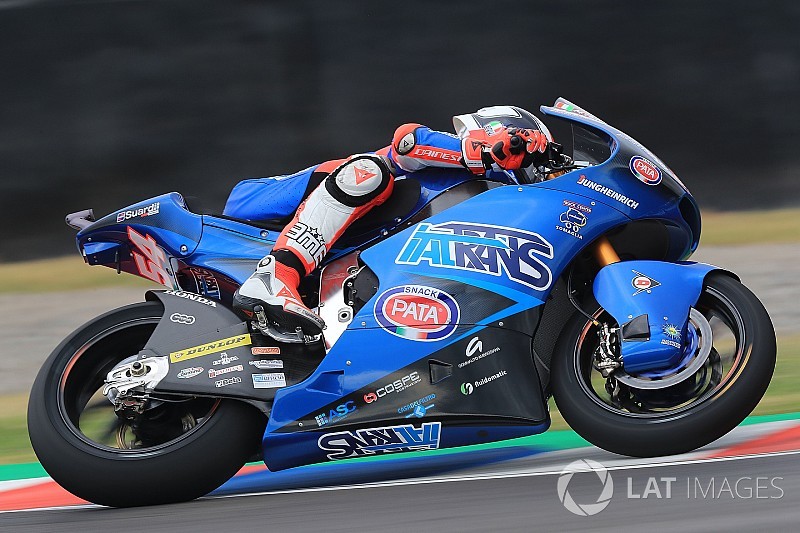 Mattia Pasini was victorious in the Moto2 race at a damp Termas de Rio Hondo after he held off charges from Miguel Oliveira and Xavi Vierge.

Italtrans rider Pasini took the lead from Lorenzo Baldassarri (Forward) on Lap 3 as both Italians, along with KTM works rider Oliveira, managed to initially build a lead over the rest of the field.

Pasini was not troubled for seven laps until he suffered a big wobble on a wet patch at the entry of the back straight, which allowed Oliveira to go past him.

However, Pasini made a forceful move on Oliveira at Turn 13 on the same lap and was back ahead.

The top three were soon caught by Vierge (Intact GP), who lost a few seconds early on when an overly optimistic overtaking attempt led him to go wide and nearly crash, as well as Marc VDS rider Alex Marquez.

Pasini and Oliveira traded places one more time in the same manner as before and the Turn 13 move forced the latter wide enough for Vierge to sneak past.

Pasini then came under pressure from Vierge, but the order of the top three did not change for the rest of the race and the 32-year-old took the win, his fourth in the intermediate class.

Vierge matched his best Moto2 result in second with Oliveira completing the podium.

Baldassarri lost pace late on and was 3.7s behind in fourth with Marquez having to settle for fifth after running wide twice during the race.

Kiefer's Dominique Aegerter finished eighth with Qatar winner Francesco Bagnaia (Sky VR46) enduring a low-key race and only managing a ninth from 15th on the grid.

The top 10 was completed by Vierge's Intact teammate Marcel Schrotter.

Sam Lowes (CGBM) was running close to the top five before losing ground and only finishing 13th, with Hector Barbera (Pons) finishing in a lowly 20th position.

Brad Binder (KTM) hit the back of Jorge Navarro (Gresini) and crashed at Turn 7 on lap 2, the latter also having to retire with a broken exhaust.