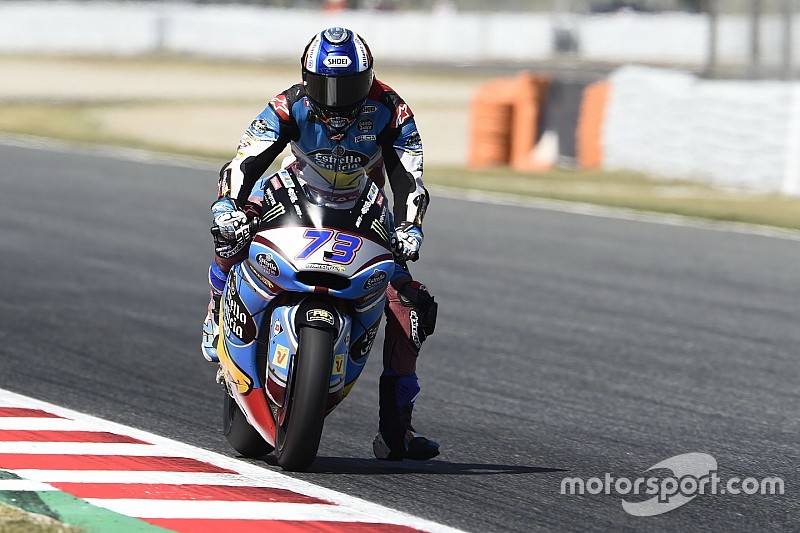 Alex Marquez secured his second win of the Moto2 season in dominant fashion at Barcelona, cutting the points advantage of teammate Franco Morbidelli in the process.

From pole position, Marc VDS rider Marquez made a clean getaway to lead into Turn 1, with Morbidelli vaulting from sixth on the grid to second ahead of Mugello winner Mattia Pasini.

By the end of the opening lap, Marquez had opened up one second from his pursuers, helped by Morbidelli and Pasini scrapping hard over second, and was two seconds clear the following lap.

The Spaniard extended his advantage to as much as four seconds at one stage, and finally crossed the line 3.5s clear of the opposition to take his sixth career grand prix win.

Italtrans rider Pasini took back-to-back podium finishes in second, pulling away from a fading Morbidelli early on as the Italian fell into the clutches of Thomas Luthi (Interwetten) and Miguel Oliveira (KTM).

Several laps later, Luthi forced his way up the inside at Turn 5 for third, and as Morbidelli ran wide and suffering a wobble, Oliveira took advantage to move up to fourth.

Morbidelli ended up dropping behind Forward Racing's Lorenzo Baldassarri in the battle for fifth with 10 laps to go.

Behind Morbidelli, Jorge Navarro (Gresini) scored his best Moto2 result to date in seventh, while another Moto3 graduate, Fabio Quartararo (Pons), fought his way up to eighth in the latter stages.

Completing the top 10 were Xavi Vierge (Tech 3), returning from injury after sitting out the previous round at Mugello, and Hafizh Syahrin (Petronas Raceline), who both pushed Honda protege Takaaki Nakagami down to 11th.