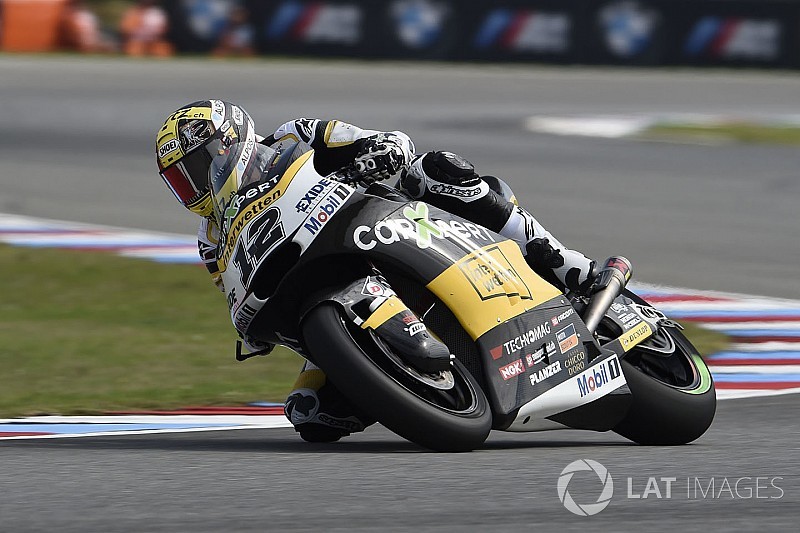 Class veteran Thomas Luthi dominated a shortened Moto2 race at Brno, after the arrival of rain turned the event into a six-lap dash to the finish line.

The Swiss rider was victorious after taking the lead into Turn 1 from seventh on the grid of an interrupted race, after the red flags were shown at one-third distance in the original start.

With the first part of the race kicking off in dry conditions, poleman Mattia Pasini led the bulk of the early running before rain arrived on the seventh lap of the scheduled 20.

The Italian was then passed in quick succession by Franco Morbidelli and Miguel Oliveira at the start of the eighth lap, and had slipped to fourth behind Alex Marquez when the race was halted on lap 8.

However, with grid positions for the six-lap restart dictated by the standings at the end of the last completed lap, Pasini lined up on pole from Morbidelli and Oliveira.

Luthi had worked his way up from 11th on the original grid to take the restart in seventh, and surged to an immediate lead he would never lose.

Three laps into the restart, the Interwetten rider was three seconds clear of Marquez, and he took the finish line 4.991s clear of the Spaniard.

The Italian found himself bullied down to ninth place on the second lap of the restart, and could only recover one position to eighth after that, making Brno his worst finish of 2017 so far.

Morbidelli's troubles paved the way for Luca Marini (Forward) to come fourth ahead of Xavi Vierge (Tech 3) and Simone Corsi (Speed Up), while Francesco Bagnaia, who had also been in the running for a podium, slipped to seventh on his Sky Racing VR46 machine.

Completing the top 10 were Remy Gardner (Tech 3), son of 1987 500cc champion Wayne, and US rookie Joe Roberts, making his grand prix debut at AGR in place of Yonny Hernandez.

Pasini crashed out on the opening lap of the restart, while Sandro Cortese and Dominique Aegerter were non-starters after retiring during the initial start.

Kent returns to Moto2 in Austria in place of Schrotter