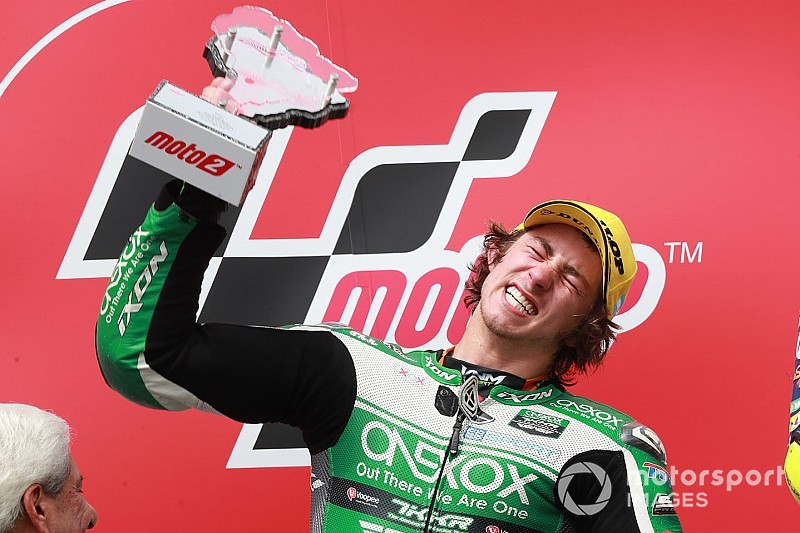 Remy Gardner says he was overwhelmed by a sense of 'euphoria' after crossing the line to secure his first Moto2 podium at Termas de Rio Hondo.

Having narrowly missed out on the top three at the season opener in Qatar, the Aussie grabbed a well-earned second place in Argentina.

While it could easily have been a first win for the second-generation rider, who led the majority of the race before losing out to Lorenzo Baldassarri in the closing stages, the SAG rider was far from disappointed with the outcome.

Instead he said it was a euphoric moment when he crossed the line, the result vindicating his move from Tech 3 to the Kalex package for 2019.

"It's kind of like, I'm expecting myself to be here, so I'm not surprised in myself," he said. "But also it's like... finally.

"It was a feeling of euphoria when I passed the line. It's not like a massive surprise to me, from last year I knew I could do it. It's just nice to see it has paid off.

"It was a good school, it taught me well. We got some decent results on what we had last year, and it definitely prepared me better for this year, now that I'm on some very good equipment."

Gardner added that the torquey feel of the new Triumph engine is playing a key role in his run of good form.

"There's still a point where you have to carry corner speed and it's still a bit like Moto2 last year, but it's just a touch more squaring up the corner, which I like. I think that's also playing into my favour this year.

"And for heavier riders it helps out a lot. I'm not a feather, let's put it that way. I don't have the body for Moto3, even in Moto2 I notice it. I've got the body for big bikes, unfortunately.

"But we're still there, we're still doing it. We did miss a little bit straight line speed [in Argentina], but we were able to compensate on the brakes and in the corners."

The fast start to the season has left Gardner second in the points behind the unbeaten Baldassarri, with the upcoming round in Austin set to provide a yardstick for his title hopes.

"We're going to have races where we struggle, obviously," he said.

"Texas, I've never really clicked there, so that will be kind of an interesting track for me.

"I'm going there with an open mind this year because we're on new equipment and things are working a lot better.

"Our goal in the team, at the beginning of the season we said Top 10. I said top sevens, and now we want to be top fives consistently.

"Even thought we're second now, we've still 17 races ahead, so it's a long year."