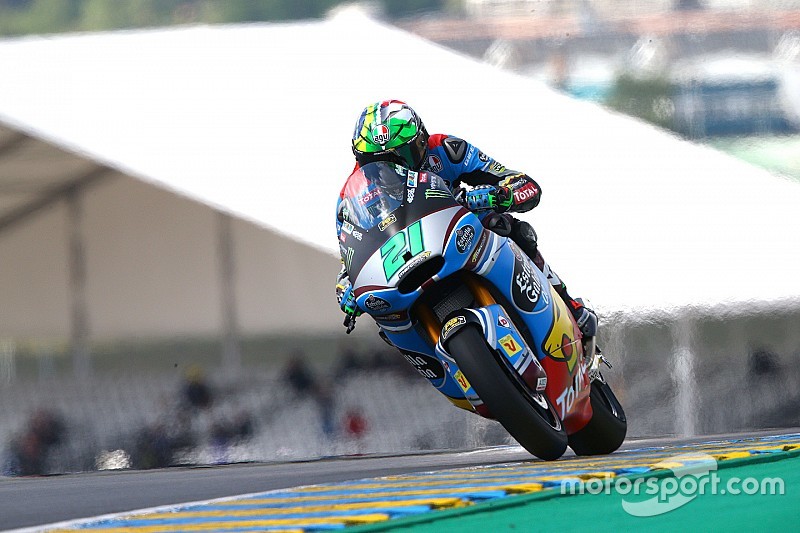 Marc VDS rider Franco Morbidelli bounced back from his Jerez crash to claim his fourth win in five Moto2 races this season at Le Mans.

Morbidelli fought off poleman Thomas Luthi early on and had to keep impressive rookie Francesco Bagnaia at bay in the end to extend his lead at the top of the standings.

Luthi, who won at Le Mans twice in both 125cc and Moto2, led the race after the start but couldn't shake off Morbidelli, who was into first place before the opening lap was out.

The Italian settled in at the helm of the race early on, but Luthi kept pace, briefly edging ahead at the chicane during the fifth lap before Morbidelli retook the spot on corner exit.

A couple of laps later, Luthi attempted the move again and made it stick, but his stint in the front was short-lived.

He struggled on exit out of the chicane on the eighth lap, with Morbidelli taking the inside line into La Chapelle and Luthi then going wide after contact on corner entry.

The Swiss rider returned to the racing line in only fourth, having slipped behind rookie Bagnaia and Morbidelli's Marc VDS teammate Alex Marquez – the former having passed the latter initially before Bagnaia reclaimed the position.

The Luthi – Morbidelli duel had made it a close four-bike pack leading the race in the first half, but with the Swiss rider out of his way, the Moto2 points leader began to edge away from his rivals.

But while Morbidell managed to shake off Marquez and Luthi, Bagnaia remained close, trading fastest laps with the Marc VDS rider and keeping the gap between half a second and a second.

That status quo was preserved until the final few laps, when Bagnaia began to close in - but he couldn't make significant inroads and settled for second.

Having shadowed Marquez for a number of laps, Luthi eventually made a move stick but made no further progress from that point onwards, completing the podium.

Marquez himself brought the bike home in fourth, the Spaniard nursing a hairline fracture in his left foot after an FP3 crash.

Mattia Pasini looked like he could be a factor in the lead fight early on but eventually lost pace and finished a lonely fifth, ahead of Dominique Aegerter.

Usual frontrunner Miguel Oliveira, who had finished in the top six in all four of the season's preceding races, had a low-key weekend, the KTM rider ending up only 17th at the chequered flag.