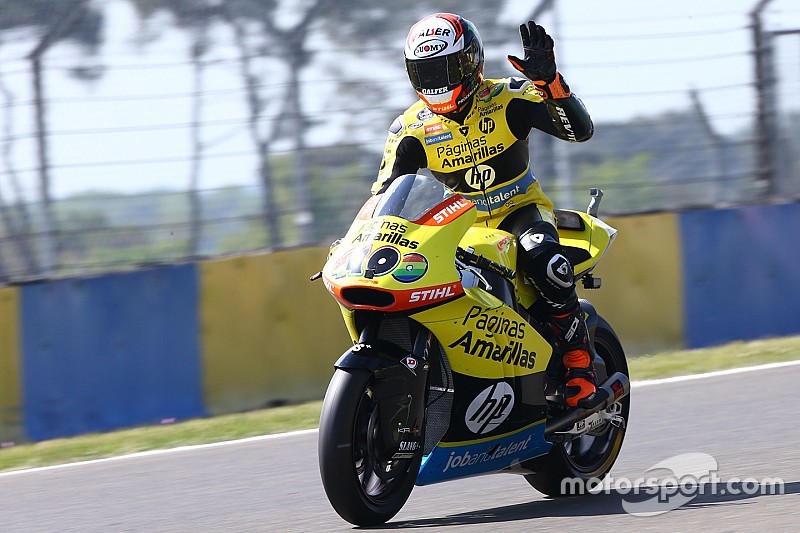 Alex Rins picked up his second win of the 2016 Moto2 season at Le Mans, overtaking poleman Thomas Luthi early on and then fending off Simone Corsi.

And with erstwhile points leader Sam Lowes having finished just sixth, a victory for Rins promoted him to the top of the standings after five races.

Off the line, it was a stellar getaway for poleman Luthi and a rather sluggish one for Rins, the Spaniard dropping behind Franco Morbidelli, Takaaki Nakagami and Corsi.

Rins quickly cleared Corsi, however, before the two of them passed Nakagami and then Morbidelli, setting out after Luthi.

From that point on, Luthi and Rins appeared set to pull away from the field - but as they began to duel on lap five, with Rins taking the lead at La Musee before the Swiss rider snatched it back, their breakaway came to naught.

On lap seven, Rins cleared Luthi again, and before the poleman could respond, he was divebombed into Turn 1 by Corsi and then slipped back to fourth behind Lorenzo Baldassarri.

It took Luthi until well past halfway to clear Baldassarri, at which point the Swiss rider has slipped to a second and a half down on two leaders - whereas the Italian would drop his bike on the ground with five laps to go.

Out front, Corsi kept up with Rins and looked as if he would be able to mount a last-gasp challenge for victory - but the Italian instead slipped back in the final laps, finishing almost two seconds adrift.

Luthi completed the podium, with Morbidelli and Nakagami making up the top five ahead of Lowes.

It was seventh for Axel Pons - a repeat of his best-ever finish in Moto2 - with Hafizh Syahrin taking eighth ahead of of Luis Salom and last year's Moto3 runner-up Miguel Oliveira.