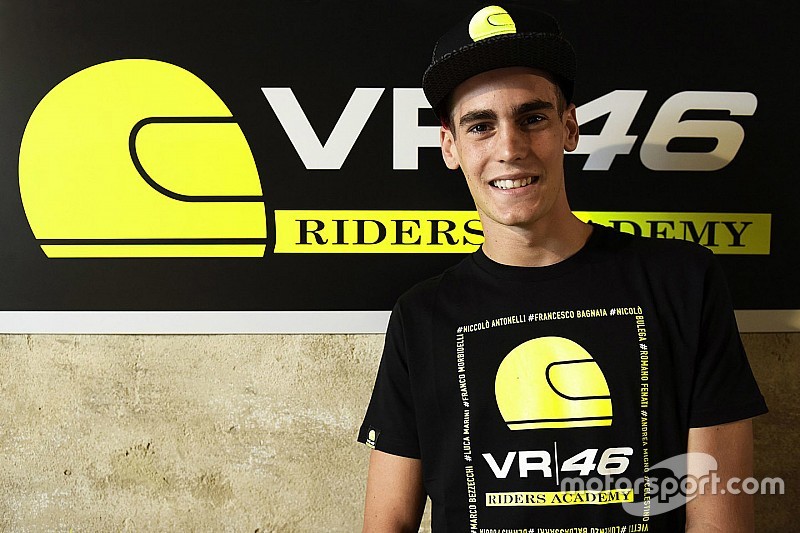 Stefano Manzi will race for Valentino Rossi's VR46 team in Moto2 next year, the provisional entry list for the series has revealed.

The 17-year-old joins Francesco Bagnaia in the team, taking the seat that had been originally earmarked for Romano Fenati prior to the Moto3 frontrunner's dismissal from the VR46 fold earlier this year.

Manzi has just one season of grand prix racing to his name, having contested Moto3 in 2015 full-time before dropping back to the Spanish-based CEV Moto3 series this season with the Aspar Mahindra team.

The Italian has however made three grand prix wildcard apperances for the Indian marque this year - most notably at Silverstone, where finished fourth.

It's thought that the reason for him to be fast-tracked to Moto2 is down to his large stature of 5'11'' (180cm), which makes being competitive in Moto3 difficult.

A provisional entry list for the 2017 Moto3 season also fills in the remaining gaps in the rider market.

The most high profile of these is confirmation of Brno race winner John McPhee remaining in the lightweight class as part of a new Dorna-backed 'GB Team' on Honda machinery.

A number of other established riders will remain with their existing teams, including Jules Danilo (Ongetta), Philipp Oettl (Schedl), Gabriel Rodrigo and Juanfran Guevara (both RBA), Darryn Binder and Marcos Ramirez (both Platinum Bay).

The line-up of 31 bikes is completed by CIP Mahindra duo Marco Bezzecchi and Enzo Boulom and SIC58 pairing Tony Arbolino and Tatsuki Suzuki.