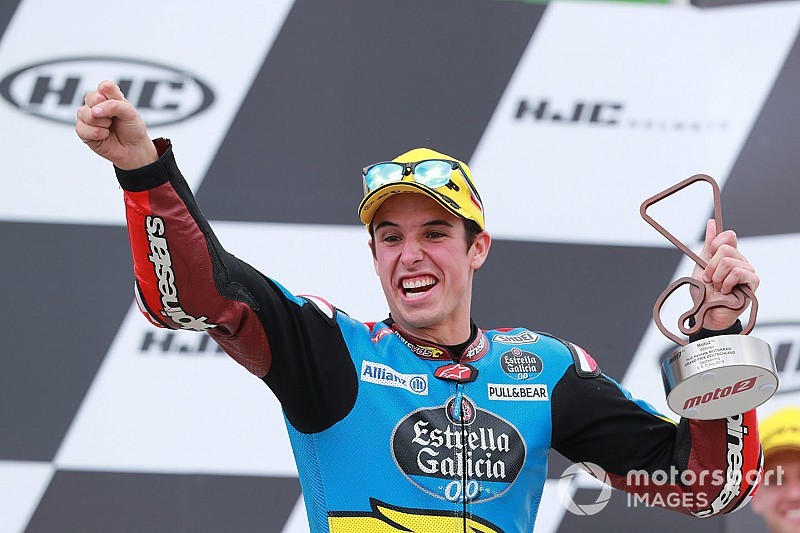 Marc VDS rider Alex Marquez scored his fourth win in five Moto2 rounds by dominating the race at the Sachsenring.

Marquez, who had taken pole on Saturday after fighting through Q1, was sluggish off the line, allowing Luca Marini past and making contact with Iker Lecuona at Turn 1 to drop into fifth place.

Marcel Schrotter and Lecuona then worked their way past Marini at the end of the opening lap, before the local rider ran wide, releasing Lecuona into the lead.

Marquez soon recovered to second, and launched himself down the inside of Lecuona at the first corner on the fifth lap, only to run wide. He then made a move stick at the same corner two laps later.

Lecuona stayed with Marquez and was briefly ahead on the 10th lap, but was swiftly pushed down to second - and then to third place on the main straight as Brad Binder joined their battle.

The factory KTM man had pushed through from 17th on the grid, but his charge ended just short of Marquez, and as he and Lecuona continued to scrap Marquez began to break away.

Marquez was over two seconds in the clear by the time Schrotter caught up to and re-passed both Lecuona and Binder, with the German likewise unable to stop Marquez's lead from growing.

Marquez eased off in the final laps, taking the chequered flag by 1.2 seconds over Binder, who had worked his way back past Schrotter to secure his second consecutive runner-up finish.

Lecuona tried to challenge Schrotter for the final spot on the podium on the last lap, but crashed at the last corner.

This promoted Fabio Di Giannantonio into fourth place, the Speed Up rookie recording by far the best finish of his debut campaign so far.

Tom Luthi took fifth place despite having served a long-lap penalty for taking out Marquez's teammate Xavi Vierge at Turn 1.

Jorge Navarro (Speed Up) took eighth after overtaking Binder's teammate Jorge Martin, as the Moto3 champion settled for the best finish of his season in ninth and Marini rounded out the top 10.

Jake Dixon (Angel Nieto KTM) was the only rider to crash besides Lecuona and Vierge, as the Briton fell at the very first corner of the race.