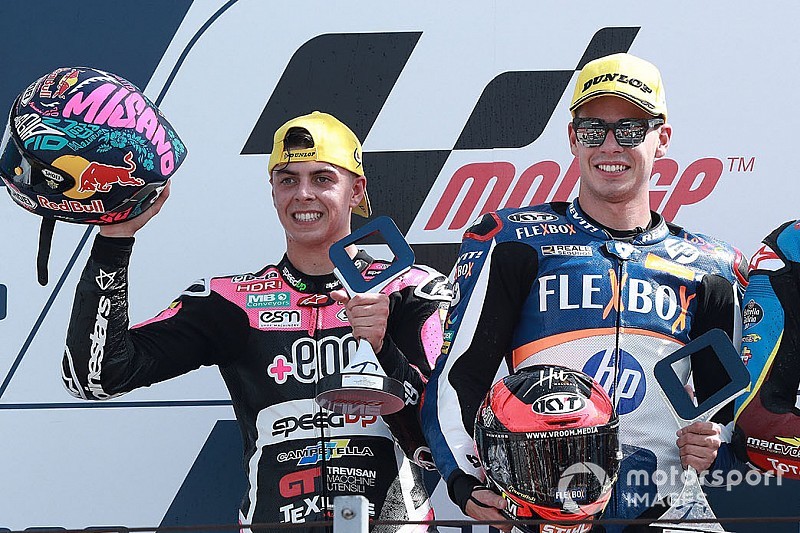 The Pons rider was forced to run wide at the fast Curvone corner on the last lap while chasing Di Giannantonio, and used that momentum to throw his bike up the inside of the Speed Up at the Carro hairpin – the pair making contact in the process.

Race Direction placed the incident under investigation, but after both riders attend a hearing with the stewards, no further action was taken.

Di Giannantonio – having secured his first Moto2 pole on Saturday – grabbed the holeshot off the line ahead of Fernandez, while championship leader Alex Marquez dropped to sixth after a poor launch.

Marquez quickly passed Tetsuta Nagashima for fifth, and took fourth from Tom Luthi on the following lap before capitalising on a moment for Remy Gardner exiting the Tramonto right-hander on the third tour to move up to the podium places.

Di Giannantonio survived a rear-end snap on his Speed Up at Turn 3 on the second lap, and dragged Fernandez along to a half-second gap over the chasing Marquez and Luthi.

Fernandez made his first attempt at taking the lead trying to use the switchback between Turns 1 and 2 at the start of lap nine, but was countered by Di Giannantonio at Turn 3.

Another error from the Speed Up rider allowed Fernandez through at Turn 6, but Di Giannantonio immediately struck back at Quercia.

Marquez followed suit at the same turn to move up to second, with a brief scrap allowing Di Giannantonio to open up a lead of seven tenths as Fernandez reclaimed second on lap 13.

Fernandez put on a late charge to reel in Di Giannantonio in the latter stages, and tried once more to take the lead in the opening complex of corner.

The Speed Up rider held firm there, but was powerless to retaliate after Fernandez’s aggressive Carro hairpin move moments later.

Marc VDS rider Marquez completed the podium to keep his points lead at a damage-limiting 26 over Fernandez heading to Aragon.

Luthi put himself back into late podium contention following an early error, but had to settle for fourth aboard his Intact GP machine ahead of Gresini’s Sam Lowes, who took his best result of the year in fifth.

SAG duo Nagashima and Gardner crashed out in the early stages, as did Tech 3’s Marco Bezzecchi and Petronas SRT stand-in Adam Norrodin.

Mattia Pasini (Tasca) and the second Intact bike of Marcel Schrotter were absent, after the riders suffered back and shoulder injuries respectively during practice.