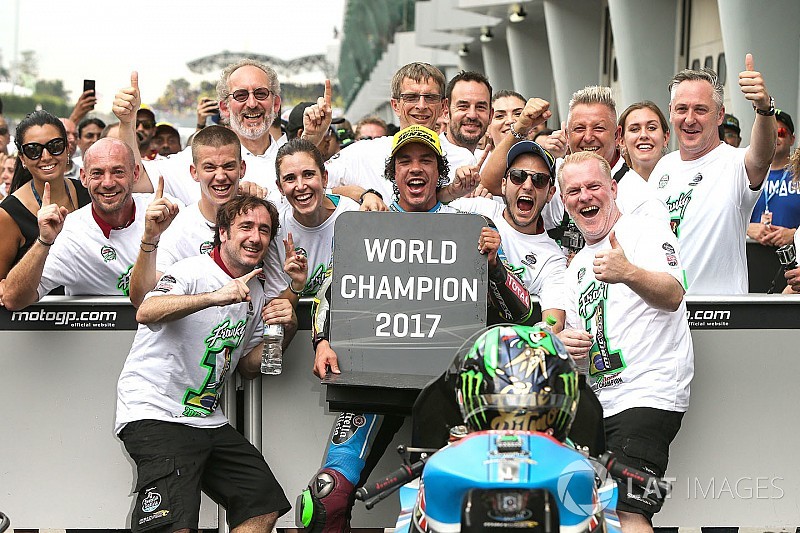 Franco Morbidelli was crowned Moto2 champion last weekend at Sepang, the culmination of a long and difficult journey for the Italian - who had to face the tragedy of losing his father four years ago.

But his journey to the coveted title - the first for a member of the VR46 Academy - wasn't easy for the 22-year-old Italian, the son of a Brazilian woman, Cristina, and former motorcycle racer Livio.

Franco inherited from his dad a passion for racing, and from his mum a love of football, a flair for languages and a sense of calm.

That calm, probably, is what allowed him to forget on Sunday morning that he was already champion after Luthi's withdrawal and still finish third.

"The moment of euphoria this morning was really short, three or four seconds," said Morbidelli.

"I was really happy when they told me I was going to be world champion, but then again the pressure of the weekend came again, and all the things you have in mind during a race weekend.

"I was focused back quite quickly, just thinking about the race. Without the championship pressure, you ride better, you ride more flowing."

Only once 'Morbido', as he's affectionately known, crossed the finish line did he accept his triumph.

His mentor and old family friend Rossi was first to greet him, the joy of victory magnified by the sheer hard work and sacrifice it had taken to reach this level.

Livio Morbidelli was a motorcycle racer himself, finishing runner-up in the Italian 80cc and 125cc championships. When Franco was two years old, his dad made him a small bike, this marking Franco's first steps on his journey towards international stardom.

Although he could tell his son was talented, Livio didn’t have the resources to support his career and didn’t know where he could learn to become a professional rider, until an old friend from his racing days, Graziano Rossi - Valentino's father - told him about Tavullia.

Graziano explained what went on at 'La Cava', a track where the likes of Rossi, Simoncelli and Andrea Dovizioso raced. It was the forerunner to the 'Ranch' that has since become the epicentre of the VR46 Academy.

Livio sold the family's house in Rome and moved to Tavullia, and step-by-step Franco became involved in competition and started to demonstrate his skills.

So impressive were Morbidelli's exploits in minibikes that in 2006, when he was just 11 years old, a development contract with the Pramac D’Antin MotoGP team was signed.

The project would come to naught and the family didn’t get any of the money that was promised, but this setback didn't prevent Morbidelli from continuing to excel.

Ultimately, Morbidelli reached the stage where the next logical step was for him to join the Spanish-based CEV 125cc series, the final stepping stone to the world championship. However, this required money that Livio simply didn't have.

Franco was 15 at that time, and was forced onto the sidelines for 10 months. After that, he found a ride in the European Superstock 600 championship, embarking on a much longer and fraught path to the grand prix paddock.

Just as Franco had established himself as one of the series' leading riders, his fledgling career was to suffer an even bigger blow. On January 13, 2013, Livio Morbidelli decided to end his life and hanged himself.

In the wake of such a tragedy, Franco was handed a lifeline by the Italian Federation, through its Team Italia programme, to race a third season in Superstock 600 aboard a Kawasaki, and he duly won the title.

That season, Fausto Gresini gave him the chance to appear as a replacement rider in Moto2 at Misano, which led to further outings in Motegi and Valencia and ultimately a full-time ride in 2014 with Italtrans. The rest is history.

"I didn't come from the usual path, I came from another world and it was hard in the beginning," recalled Morbidelli. "We didn't know if it was the right choice or if the step was too long.

"Finally with this title, we showed we did the right choice."

Next year, Morbidelli and his mentor Rossi will be rivals on the MotoGP grid, as the Moto2 champion makes the step up to the premier class with his Marc VDS team, becoming the first member of the VR46 Academy to do so.

But at Sepang, the apprentice was quick to pay tribute to the master.

“All I know, I’ve learnt it from him and his atmosphere," said Morbidelli, looking at his friend Rossi, and smiling shyly.