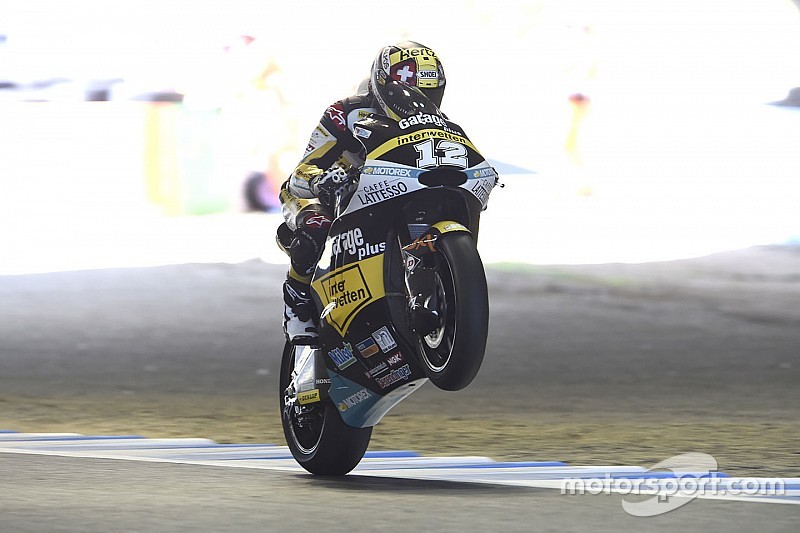 Thomas Luthi scored his third win of the Moto2 season at Motegi, managing to keep a charging championship leader Johann Zarco at bay.

Luthi took the lead of the race at the start, with polesitter Zarco dropping to fourth behind Franco Morbidelli and Takaaki Nakagami.

It was then for Zarco to make it to the chequered flag and score strongly to stretch his lead in the standings.

But the French rider was in no mood to settle for fourth, clearing both Nakagami and Morbidelli midway in the race, before setting of in pursuit of Luthi.

Soon, Zarco was all over the back of the Interwetten rider, who was forced to defend his lead in the final two laps.

But Luthi had just enough in hand in the end to win, as Zarco ended 0.386s behind in second.

Meanwhile, the fight for third heated up between Morbidelli and Nakagami in the final stages of the race.

Going into the final lap, Morbidelli was just ahead of Nakagami, but the Japanese rider for the briefest of moments took third before the Italian switched back to re-take the position.

The two crossed the line nose-to-tail, Morbidelli just managing to edge out Nakagami to take the final podium spot.

Behind the top four, Sandro Cortese ended a distant fifth, the German registering his best result of the 2016 season. His Dynavolt teammate and future MotoGP rider Jonas Folger was another man to crash out.

Simone Corsi got the better of fellow grand prix veterans Mattia Pasini and Julian Simon in a close fight for sixth, while the top 10 was completed by Marcel Schrotter and Xavier Simeon.

Going into the final three races of the season, Zarco now has a lead of 21 points over Rins and 60 on Lowes.

Remy Gardner released from Japan, will race at Phillip Island