Along with MotoGP, the Moto2 and Moto3 seasons will kick off in Qatar this weekend with both grids boasting several potential future premier class stars. David Gruz selects 10 riders who are likely to shine in 2017. 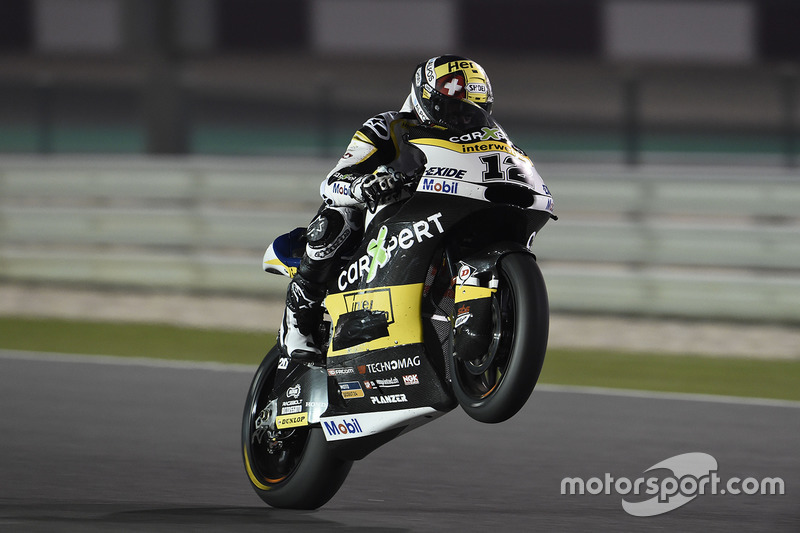 With 166 250cc/Moto2 starts under his belt, it’s as good a time as any for former 125cc champion Luthi to finally mount a serious title challenge. Since the intermediate class morphed into Moto2 in 2010, the Swiss rider placed between fourth and sixth every season - until last year.

A long-time Suter rider, Luthi made the switch to Kalex in 2015 after his Paddock GP squad was taken over by Technomag. His second year with the German bike was a breakthrough as he made it into the championship top three at last, scoring four wins and beating three of this year’s four MotoGP rookies - Alex Rins, Sam Lowes and Jonas Folger.

With that trio, plus champion Johann Zarco graduating to MotoGP in 2017, the stiffest of Luthi's competition is gone. The 30-year-old's experience could give him a serious advantage for the first half of the season, and propel him towards a long-awaited title assault. 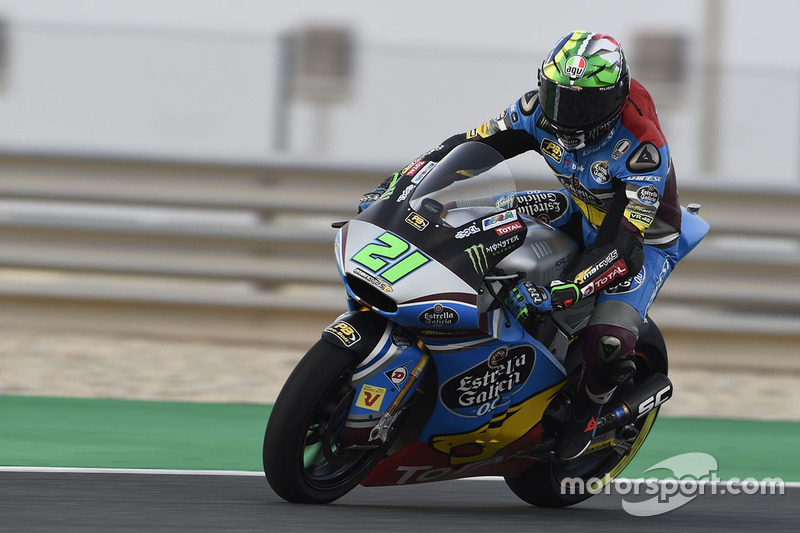 So far, the main theme of Morbidelli’s career has been steady improvement. He joined Moto2 as the reigning European Superstock 600 champion, and was a regular top 10 finisher by the end of his rookie campaign in the Grand Prix paddock. He started the subsequent season even more consistently, eventually scoring his maiden podium at Indianapolis.

However, a motocross injury ended his season prematurely, forcing him to settle for 10th in the standings. But he bounced back strongly in 2016, making another step forward by scoring eight podiums in the last 11 races and - just like Luthi - mixing it with the 2017 MotoGP rookies. He beat early title contender Lowes, and was just a point behind Rins in fourth.

While Morbidelli has yet to score a first win, his aims in 2017 should go much further than that, as being the second-highest placed returnee - and with the team that took Tito Rabat to the title three years ago - makes him one of the obvious picks for the title. 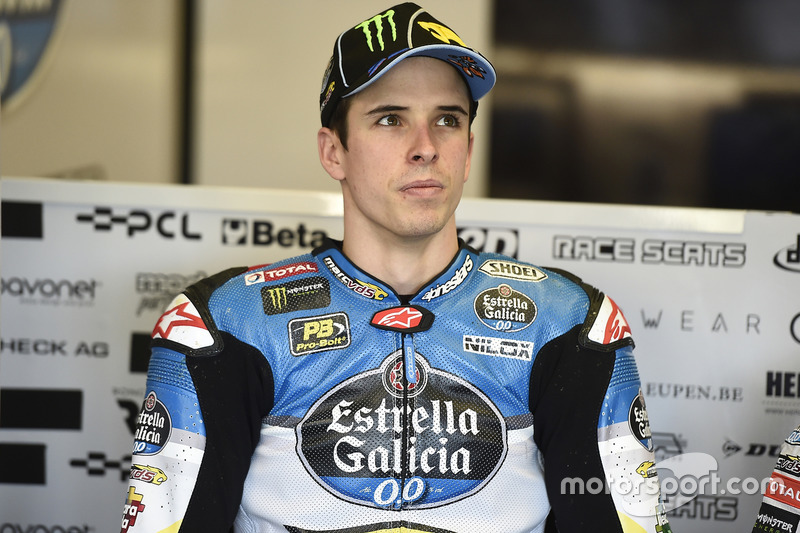 While his rise through the ranks has not been as meteoric as elder sibling Marc's, there still seems to be an air of inevitability that the younger of the Marquez brothers will eventually make it into MotoGP.

An unspectacular rookie season in Moto2 - the result of the 2014 Moto3 champion putting too much pressure himself to follow in his brother's wheeltracks - was followed by little improvement in the first half of 2016, although his form improved later in the campaign as he finally scored his first intermediate class podium at Aragon and became a regular top 10 presence.

With four of last year's top seven in the points now gone, Marquez has the perfect chance to become a bona fide frontrunner. His testing results promise a lot more than that, as he was fastest at Jerez and third in Qatar, a level of consistency only matched by his teammate Morbidelli.

Should he have a fair shot at the title, or even beat Morbidelli, the Marc VDS squad ought to have the perfect justification to promote Marquez to a MotoGP ride. 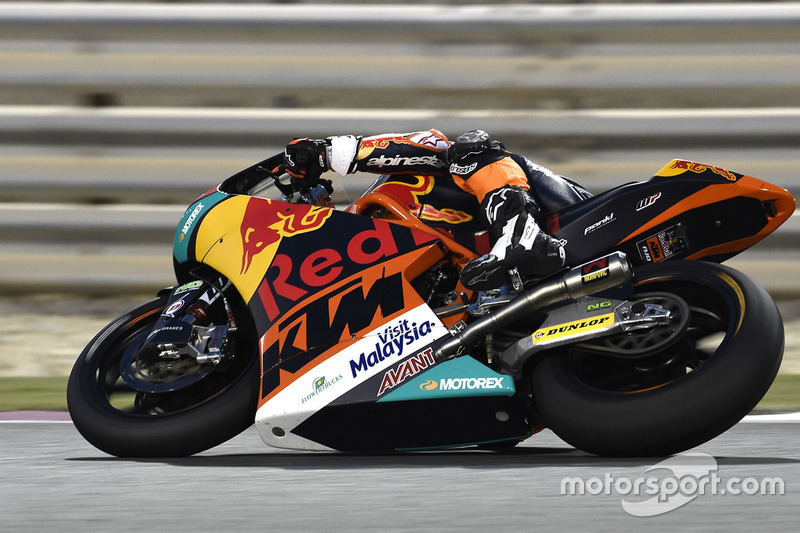 On first glance, it might seem a little odd to include a rider like Oliveira on this list. The 22-year old took five years before he could fight for the Moto3 crown, or even to take a race win, and then he only finished 21st in his rookie Moto2 campaign last year.

However, a closer look at his results paints a different picture – he was a regular top 10 finisher during his part-time rookie Moto3 campaign, and he spent two seasons with the unproven Mahindra bike. When the Ajo KTM squad finally signed him up for 2015, he was nearly unbeatable by the end of the season and only missed out on the title by six points to Danny Kent.

The Portuguese rider could not replicate his strong form in his first year of Moto2, as he only had three top 10 finishes with eighth as his best result. But the Leopard squad as a whole struggled, and he still beat teammate Kent by a point despite missing four of the last five races.

For 2017, Oliveira is reunited with Ajo and KTM as the Austrian marque enters the intermediate class for the first time. He will go up against reigning Moto3 champion Brad Binder, but has the advantage of having raced in Moto2 for a season already and having less fanfare surrounding him.

Should Oliveira come out on top, he could find himself in contention for a factory MotoGP ride in years to come. 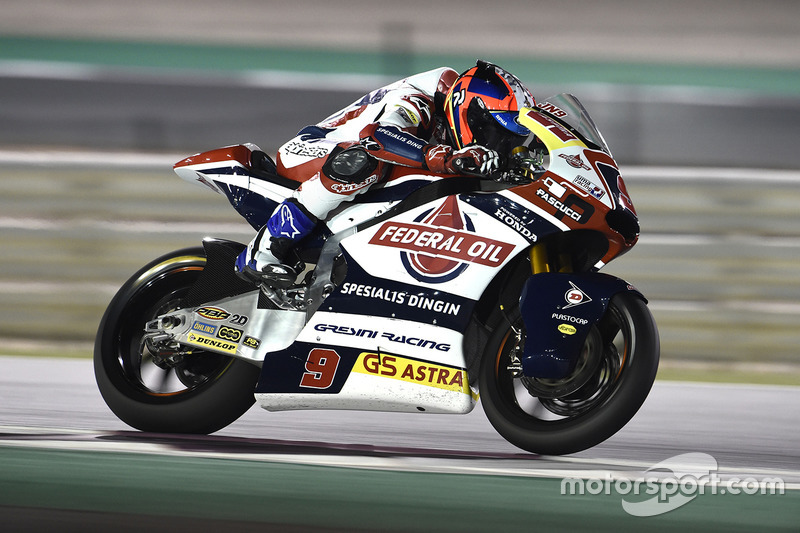 With Rins joining MotoGP, his replacement as the next big Spanish talent to arrive in Moto2 is Navarro. As a rookie in 2015, he didn't need much time to impress – he outshone Estrella Galicia teammate Fabio Quartararo, who confidently beat him a year before in CEV Moto3 – and became the best-performing Moto3 rookie since, coincidentally, Rins.

For much of 2016, Navarro was the main rival of Brad Binder, but his season fell apart right after he took his first win on home soil. A broken leg forced him out of Assen, and then he retired six times in the final 10 races. A second win at Aragon was enough to salvage third in the standings.

In just two years, Navarro matured into one of the most complete performers in Moto3, fighting and beating more experienced opponents. His move to Moto2 therefore makes sense, and he replaces Sam Lowes at Gresini, who is now with the Aprilia MotoGP team that is run by the Italian squad.

If everything goes according to plan, who's to say that Navarro may not end up making the same move in two years' time? 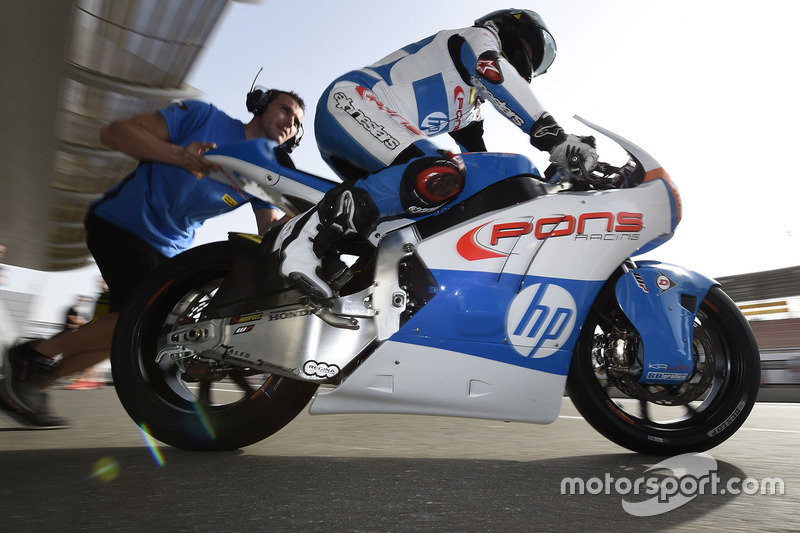 Two years ago, Quartararo joined the MotoGP paddock touted as a wonderkid, having won the Spanish CEV Moto3 series twice by the time he turned 15. Even though his former rival and teammate Navarro beat him to the title of top rookie in 2015, Quartararo still finished 10th despite missing five races and retiring from another five.

Much was expected of Quartararo in 2016 as he moved across to the Leopard squad, but the French teenager's year was a disappointment, as he went through the entire campaign without so much as a podium finish. Moreover, he was beaten by his rookie teammate Joan Mir quite comfortably.

That didn't stop Quartararo being picked up by Sito Pons to replace Suzuki MotoGP-bound Rins in his Moto2 squad for this year, and in some ways an early graduation could benefit him. Expectations will be much lower this time around, giving him time to mature and prepare for what could be a breakthrough year for the rider once tipped to be 'the next Marquez' in 2018.

As he finished third in 2015 and second in 2016 in his last two Moto3 seasons, there can only be one target for Bastianini this year in his fourth year in the lightweight class.

The young Italian took top rookie honours in his debut Grand Prix campaign in 2014, before becoming best of the rest behind Kent and Oliveira one year later. He showed impressive raw pace with four poles that season, but he could only convert one of them into victories.

That ratio got worse in 2016, as he failed to convert any of his three poles, and there was a significantly bigger points gap between him and champion Binder than there had been in 2015. In some ways, staying Moto3 again represents something of a risk, as anything but the title aboard the Estrella Galicia Honda would be regarded as a failure.

While last year's strong rookie class is likely to be even stronger this year, Bastianini has proven himself to be a consistent rider, with only seven retirements in three years to his name. Should he also show superior pace to his rivals in the early stages of the year, he could set himself firmly on course for championship glory. 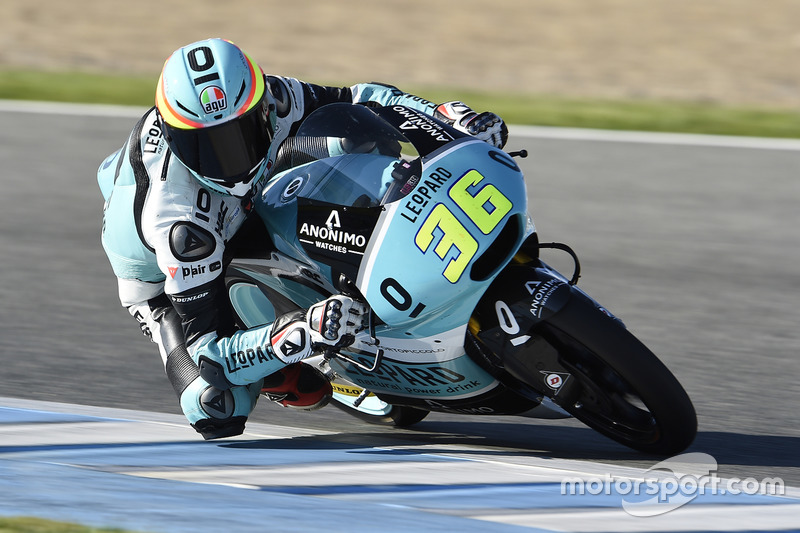 Yet, it was Leopard Racing’s Mir who rose above all of the aforementioned challengers to become the year's top rookie in the points. The Spaniard excelled in every aspect, and looked like he was the complete package despite his inexperience.

He scored a pole position, two fastest laps, a win at the Red Bull Ring, and finished in the top 10 in all but two of the races he finished. He nearly scored twice as many points as his highly-rated teammate Quartararo, and was also comfortably clear of the more experienced Andrea Locatelli.

In theory, Mir doesn’t need to improve a lot to be a title contender, but his fellow former rookies ironing out their weak points could give him a hard time. It will be fascinating to see how Mir, who has the stability of continuing with Leopard for a second year, responds to the challenge. 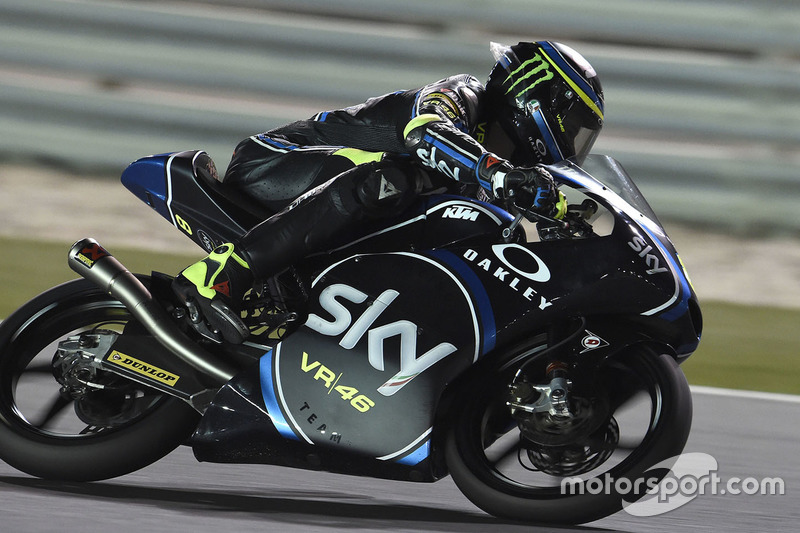 Since Valentino Rossi’s Sky Racing Team VR46 entered the Moto3 scene in 2014, it has employed several talented Italians like Romano Fenati and Francesco Bagnaia. However, the team may just have hit the jackpot with Bulega, who impressed in his debut season last year.

The 2015 CEV Moto3 winner was immediately on the pace of his much more established and highly-rated teammate Fenati. It took him four races to get a pole, which he turned into a second place at Jerez behind only an inspired Binder.

Strong qualifying results continued to be the pattern for the rest of the season, but his race performances were less consistent. Still, he demonstrated an ability to stay out of trouble - critical to success in Moto3 - having only retired once in the first 13 races. He took a more aggressive approach later in the year, which rewarded him with another podium but also with three more DNFs.

Bulega was fastest in the first pre-season test this year at Jerez, and the big question is whether he can convert the obviously massive raw pace into more strong results this year. 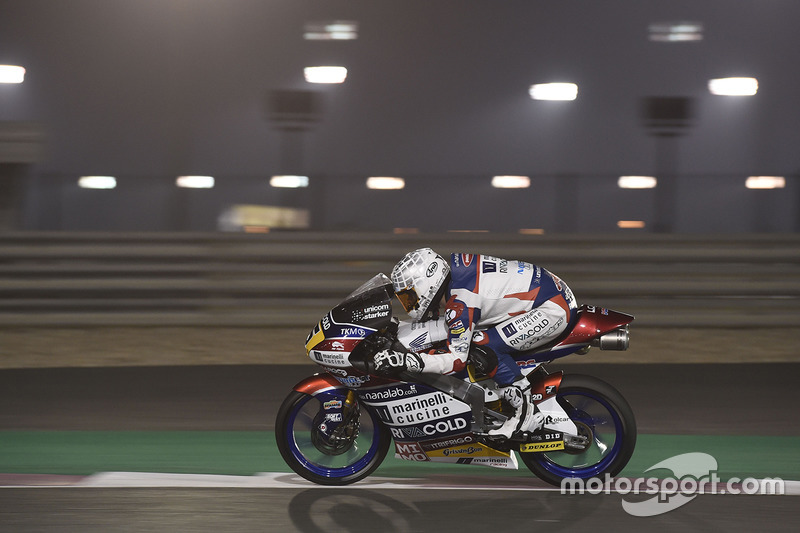 One of the big storylines of 2017 will be Fenati attempting to make up for a disastrous 2016 campaign that saw him unceremoniously dumped mid-year by the Sky Racing VR46 squad for bad behaviour.

The Italian has arguably been one of biggest talents in Moto3 ever since his debut year in 2012, which makes it astonishing that he is set to embark on his sixth year in the category this weekend. So far, his Grand Prix career has consisted of seasons where he was able to win races, but not often enough, and campaigns where he was consistent but not quick enough.

Last year's truncated season falls into the former category, as Fenati quickly sealed his seventh Moto3 win at Austin, but it soon became evident he - just like everyone else - couldn't take to the fight to Binder on a regular enough basis. His bust-up with his team during the Austrian GP was symptomatic of an erratic mentality which has always prevented him from maximising his obvious talent.

Still, Fenati could easily redeem himself this year with the Rivacold team, which was quick to snap the 21-year-old up after he became a free agent. The early signs have been promising, as he set the pace in the second official pre-season test in Qatar.

Could this be the year Fenati finally mounts a proper title challenge?