Moto2 team Marc VDS Racing says none of its crew were harmed in a garage fire that broke out at Motegi on Thursday at the MotoGP Japanese Grand Prix.

This weekend marks the first Japanese GP to be staged by MotoGP since before the COVID-19 pandemic enveloped the world in 2019.

But Moto2 squad Marc VDS' preparations for this weekend's 16th round of the 2022 season were hindered when a fire erupted in its garage on Thursday evening at Motegi.

The pit box, located at garage 12 between Suzuki and Aprilia in the Motegi pitlane, was set ablaze when one of Marc VDS' starter motors for its bikes caught fire.

Quick intervention from the circuit's firefighters meant the blaze was put under control immediately.

Due to this, neither of the team's motorcycles were damaged in the fire, nor were any of its crew.

The Marc VDS team says the fire was caused by rain leaking through the roof of its garage, which led to water causing a short in the charger for one of its bike starter motors.

A statement from the team thanked everyone in the paddock who helped get the fire under control, while also confirming that material damages were "kept to a minimum".

"After extinguishing the fire in the garage, proper inspections showed that the fire started when some rain water entered the garage, and got onto the floor where it caused a shortcut in a charger.

"That in turn let off some sparks, which then quickly grew into a fire.

"Fortunately, due to the amazing job done by all the paddock people that were there, the circuit security and circuit firemen, damages were thankfully kept to a minimum.

"The Elf Marc VDS Team wants to publicly thank the work and huge help provided by all our paddock colleagues, with a special mention to the Suzuki MotoGP team who worked with us to clean and rebuild the garage as if it was their own.

"With all our team members safe and the garage rebuilt, we are ready to start the Japanese GP tomorrow." 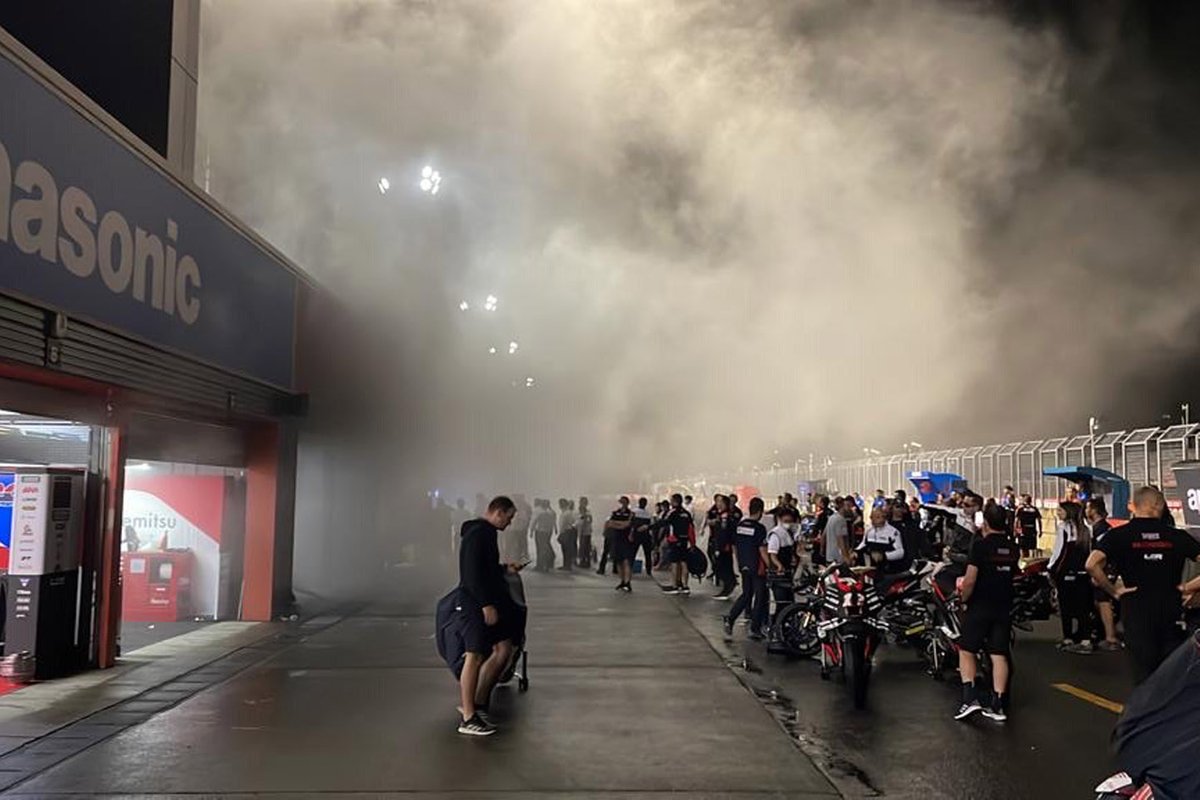 This isn't the first time the MotoGP pitlane has experienced a fire incident.

At the Malaysian GP in 2018, one of Suzuki's MotoGP bikes caught fire while it was being warmed outside of the team's pitbox at Sepang.

And in 2019, the inaugural MotoE World Cup had to be delayed when a massive fire destroyed the entire fleet of Energica electric motorcycles during a pre-season test at Jerez.

"Our Suzuki boys did a great job to avoid an absolute disaster. Good job we were working late!"

Practice for the 2022 Japanese GP gets underway tomorrow, though there will only be one session for each class after MotoGP organisers elected to alter the Friday schedule to allow for the complicated logistical situation in getting the entire paddock from Aragon last weekend to Motegi.

Mir out of Aragon and Japanese MotoGP rounds with injury

Moto2 team Marc VDS Racing says none of its crew were harmed in a garage fire that broke out at Motegi on Thursday at the MotoGP Japanese Grand Prix.

Moto2 championship leader Augusto Fernandez has reached an agreement with KTM to compete for GasGas-Tech 3 in next year's MotoGP championship, Motorsport.com can reveal.

Alonso Lopez dominated the Moto2 class at the MotoGP San Marino Grand Prix for a maiden victory as Dennis Foggia delighted his home support in Moto3.