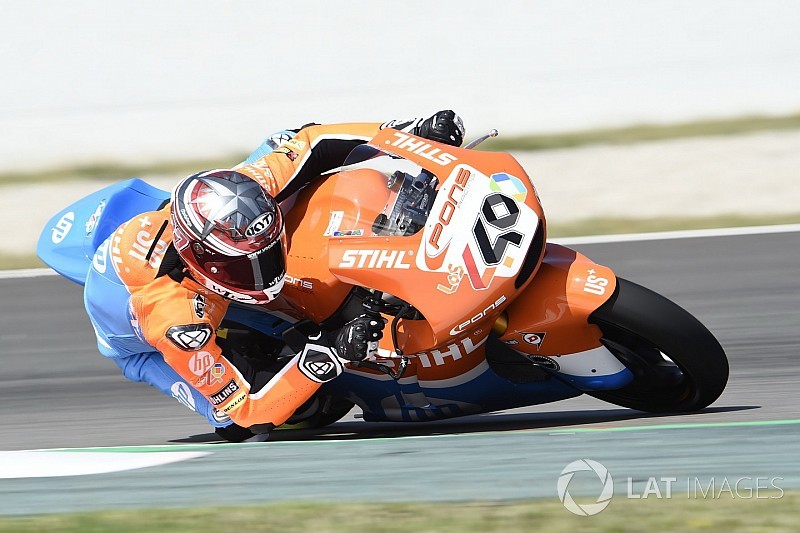 The Pons Moto2 team has announced Agusto Fernandez will remain with the squad as Hector Barbera's replacement for the remainder of the 2018 season after an impressive Catalan race.

Ex-MotoGP rider Barbera returned to the intermediate class this year after losing his Avintia ride, but was sacked by the Pons team after being convicted for a second drink driving offence in Spain last month.

Barbera was sentences to 22 days of community service, and had his licence revoked for one year.

Fernandez – who replaced Axel Bassani at Speed Up last year – was called up by Pons for the Barcelona race, and managed a respectable 14th-place finish.

This performance has led team boss Sito Pons to retain the Spaniard alongside Jerez race winner Lorenzo Baldassarri for the rest of the year.

“We're very happy to announce that Augusto Fernandez will remain one of our riders in what remains of 2018,” Pons said.

“He's very young and has a lot of talent, and adapted well to the team's way of working in Barcelona. He showed glimpses of what he's capable of, and together we begin a great project that motivates us all.

Fernandez added: “I'm delighted to be able to continie with the team and keep working with them. I want to thank them for the confidence they have and the opportunity. I'm really eager to get to Assen and see the team now.”

Ahead of this weekend's Assen round, Baldassarri sits firmly in championship contention in fourth in the standings, 26 points adrift of leader Francesco Bagnaia (Sky VR46) - who in turn is now just one point clear of KTM's Miguel Oliveira.

Luthi weighing up Moto2 return for 2019