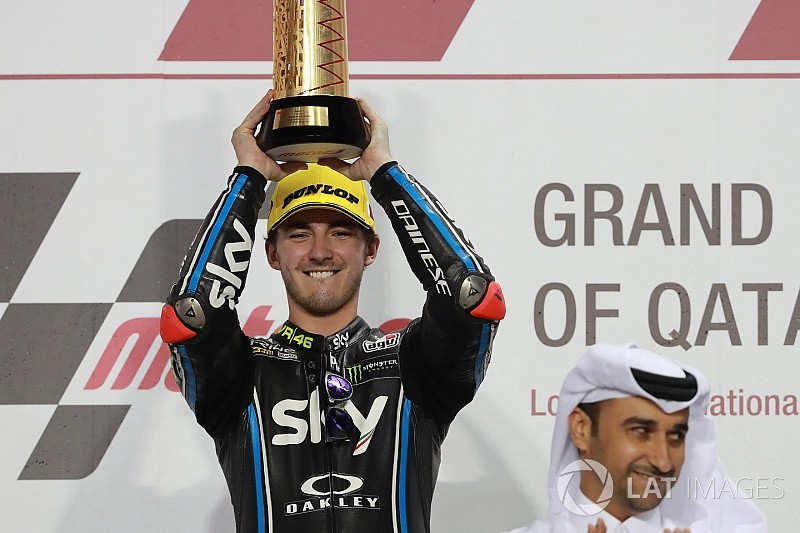 Francesco Bagnaia opened his Moto2 victory account after holding off Lorenzo Baldassarri by just a tenth of a second in the first race of the 2018 season in Qatar.

Valentino Rossi protege Bagnaia - who has already secured a MotoGP ride for 2019 with Pramac Ducati - led virtually throughout the 20-lap contest after grabbing the lead from poleman Alex Marquez at Turn 1 on the opening lap.

Bagnaia, Pons rider Baldassarri and Marc VDS man Marquez formed a lead trio that pulled away rapidly from the chasing pack, with Bagnaia able to keep his rivals at arm's length until the closing stages.

Marquez and Baldassarri swapped places several times in their fight for second before the former lost ground when his rear brake appeared to get stuck on during the 15th lap.

With Marquez out of the picture, Baldassarri soon closed on leader Bagnaia and began the final lap right on his compatriot's tail.

Baldassarri attempted a lunge at the Turn 15 left-hander, but couldn't make the move stick, conceding the lead to Bagnaia again and finishing up just 0.112s behind at the chequered flag.

Marquez held on for third place a further five seconds back after his brake problem, one second ahead of Italtrans rider Mattia Pasini.

The works KTMs of Miguel Oliveira and Brad Binder ended up fifth and sixth, the former recovering after running wide at the first corner and dropping to the lower fringes of the top 10.

Moto3 champion Joan Mir started his maiden Moto2 race down in 24th, but recovered to 11th place on board the second Marc VDS Kalex.

His former rival Romano Fenati went in the opposite direction, starting an impressive fifth but slumping to 24th by the chequered flag.

Hector Barbera was 13th on his Moto2 return on the second Pons bike, while fellow MotoGP refugee Sam Lowes crashed out while running inside the top 10 aboard the CGBM Evolution KTM.

Lowes and teammate Iker Lecuona, who suffered mechanical issues, were the only non-finishers.

The Moto2 and Moto3 riders worth watching in 2018