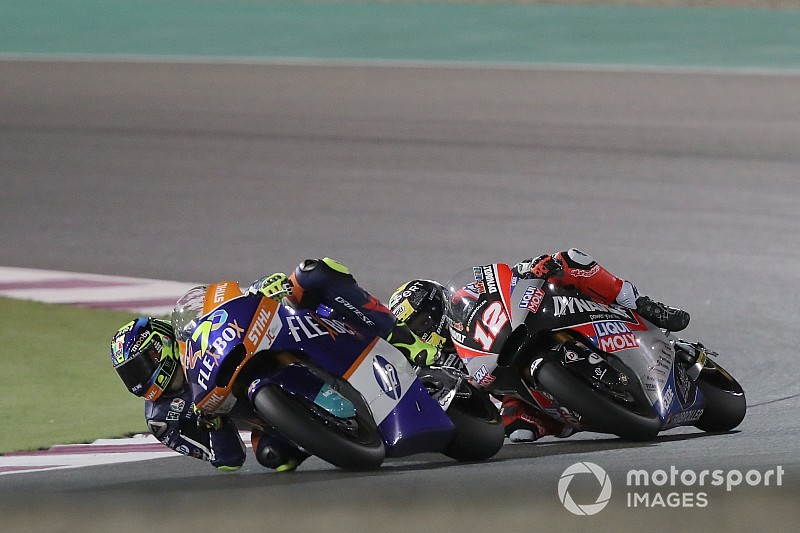 Lorenzo Baldassarri held off Tom Luthi to win the first Moto2 race of 2019 in Qatar by 0.026s as KTM suffered a disastrous start to the season.

Pons rider Baldassarri started the race third, passed polesitter Marcel Schrotter off the line, made a move on Xavi Vierge on Lap 2 and then didn't give up the lead until the finish.

Luthi on the other hand lost positions from seventh on the grid, but he was able to gradually make up positions as the race progressed.

After passing Remy Gardner and Schrotter in quick succession, he had four laps to also pass Baldassarri, but he was unable to make a move.

He was all over Baldassarri on the final lap and had a good exit out of the last corner, but he fell just short, settling for second by 0.026s on his return to Moto2 following a single year in MotoGP.

Third place was decided by an even smaller margin, as Schrotter denied Gardner his maiden Moto2 podium by just two thousandths of a second.

Alex Marquez charged from seventh to fourth in the early stages but ran out of pace in the end as he fell back to seventh, followed by Luca Marini.

Italtrans rider Enea Bastianini was the top rookie in ninth with Vierge, struggling for pace even more than teammate Marquez, settling for 10th despite leading on Lap 1.

Brad Binder was also unable to keep his early position of fourth and in the end finished 12th.

The South African still ended as the top KTM as he and 15th-placed Jorge Martin were the only two bikes of the Austrian brand to finish inside the top 20.

Martin's former Moto3 rival Marco Bezzecchi crashed on the opening lap and was 26th at the finish line.

There was another accident on the opening lap involving Jorge Navarro, Nicolo Bulega and Iker Lecuona at Turn 1, while Tetsuta Nagashima, Jake Dixon and Somkiat Chantra also failed to finish.