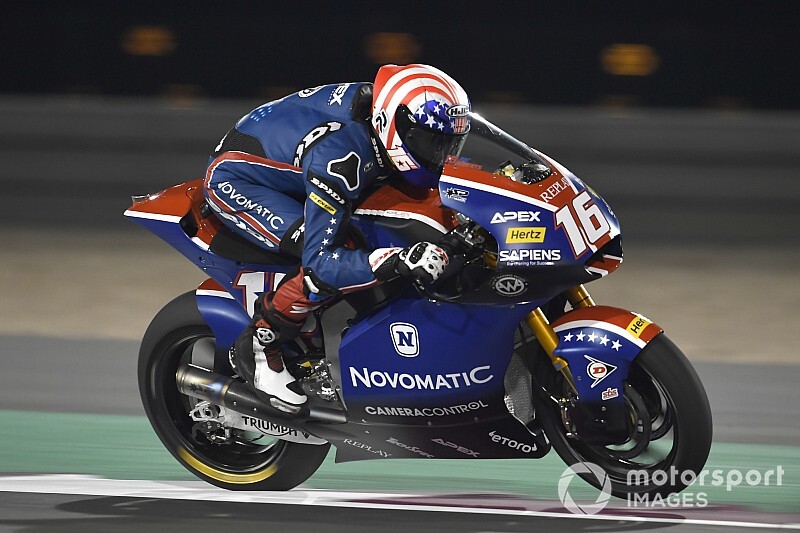 As with Moto3, because the Moto2 class was already present in Qatar for a pre-season test it will race on this weekend, while the MotoGP grand prix is cancelled as a result of quarantine restrictions on Italian travellers.

The Swiss rider edged 2018 Moto3 champion Jorge Martin, whose team Ajo Motorsport has switched chassis manufacturer to Kalex this season after KTM ended its intermediate class programme to focus on MotoGP and Moto3.

Moto2 rookie Aron Canet completed the top three at the end of an impressive session on the Aspar Speed Up, with Augusto Fernandez (Pons Kalex) and Roberts rounding out the top five.

The second session, run under floodlights, was littered with crashes, with FP1 pacesetter Luthi getting flicked from his bike at Turn 12 early on.

His Intact GP team got his bike repaired and the Swiss rider back on track late on, for him to go down again at Turn 2 and end the day clinging onto a direct Q2 qualifying place in 11th on the combined times by virtue of his FP1 lap.

Fernandez held top spot for a while in the second session, though he too took a trip into the gravel trap when he tucked the front of his bike at Turn 5.

Moments later, Remy Gardner was launched from his SAG Kalex and hit the deck heavily. Mercifully, he was able to walk away unscathed.

Valentino Rossi protege Luca Marini took over top spot in the dying stages with a 1m58.759s on his VR46 Kalex.

But his time at the head of the pack was short lived, as Roberts dipped underneath the outright lap record with a 1m58.421s to end the first Moto2 running of the decade 0.248s clear of the second VR46 machine of Marco Bezzecchi.

Marc VDS rider Sam Lowes missed the test at Qatar last week owing to an injury he picked up at Jerez last month, but was declared fit to ride on Friday and managed 20th on the combined times with a 1m59.641s.