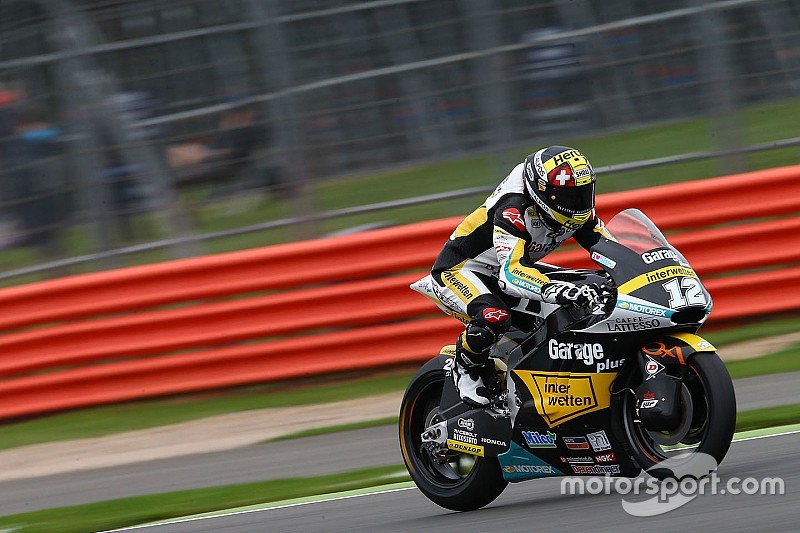 Thomas Luthi took a return Moto2 win at Silverstone, having skipped the previous round due to concussion, as points leader Johann Zarco controversially clashed with Sam Lowes.

Starting 10th, Luthi had a strong start to the race as he made his way up to third by Lap 7.

His rise up the order continued when he made an impressive move on Zarco at Maggotts and then slipstreamed past Lowes, the race leader up to that point.

Lowes also fell behind Zarco and Franco Morbidelli, but retook third from the Italian a couple of laps later.

The future Aprilia MotoGP rider spent most of the race following Zarco closely before going past him with three laps to go.

However, the Frenchman fought back a couple of corners later, only to send Lowes tumbling as he rode over the inside kerbs and into the side of the Gresini rider at Brooklands while going on the attack.

Hafizh Syahrin took fourth, with Jonas Folger, who led at the first corner of the race, taking fifth.

Zarco dropped to seventh after the incident, but recovered one place from Lorenzo Baldassarri.

However, he received a 30-second time penalty for what the stewards deemed "irresponsible riding", which demoted him to 22nd.

That allowed main championship rival Alex Rins, who recently underwent surgery due to a fractured collarbone, to close the gap in the title fight as he finished seventh.

Suzuki-bound Rins started 19th, and while he spent the early stages around the same position, he made a strong recovery in the middle part of the race.

Italians pairing Simone Corsi and Mattia Pasini finished eighth and ninth, while the top 10 was completed by Alex Pons.

Zarco's points lead over Rins is now down to just 10 points, with Lowes now a distant 44 behind the Frenchman in third.