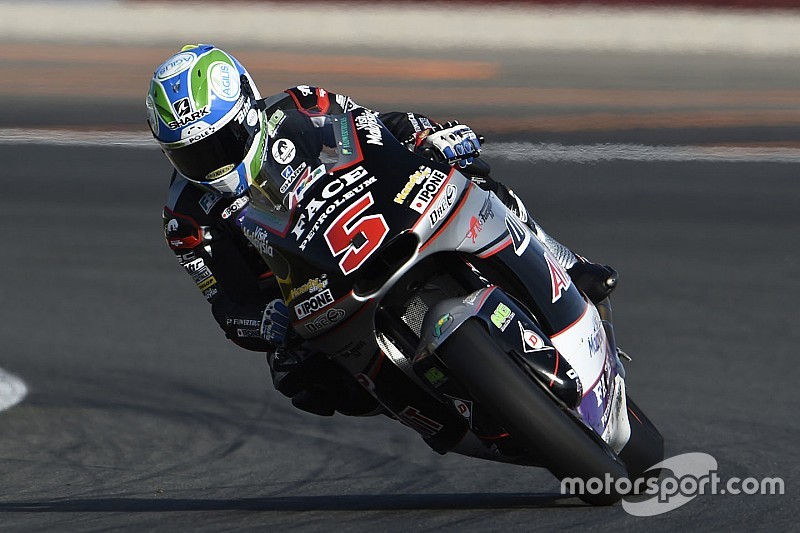 Johann Zarco took victory in the final Moto2 race of the season at Valencia, coming out on top of a fierce early battle with Franco Morbidelli before pulling away in the latter stages.

Starting from pole, Ajo rider Zarco led the opening laps, as he and Morbidelli, Thomas Luthi and Alex Rins formed an early breakaway group at the head of the pack.

The four were closely bunched in the early stages, with Zarco and Morbidelli swapping the lead multiple times in an increasingly fraught fight as Luthi and Rins engaged in their own battle for third behind.

But Marc VDS rider Morbidelli, seeking a maiden grand prix win, couldn't match the pace of two-time champion Zarco as the race entered its second half.

Visibly struggling with tyre wear, Morbidelli had dropped back to over a second behind with five laps to go, and came under increasing threat from Luthi.

That left Zarco in the clear to cruise to a seventh win of the year by a margin of 3.281s in his final Moto2 race before he steps up to the MotoGP class in 2017 on a Tech 3 Yamaha.

"I knew Tom and Franco were even stronger than me on pace, so I had to attack at the beginning and not let them get the good speed," said Zarco.

"I was good enough on the bike to attack and overtake, and I knew that after 15 laps I would come better. And this is exactly what happened, so the strategy worked really well."

Luthi made his move on Morbidelli at the start of the final lap to grab second, giving the Swiss veteran the runner-up spot in the championship.

With third, Morbidelli took his sixth podium in seven races, but fell a point short of Rins - who dropped to fifth behind Sam Lowes at the final corner - in the fight for third overall.

On his final grand prix start, Julian Simon had been running in sixth in the mid-part of the race, but a late crash for the Spaniard promoted Takaaki Nakagami to sixth at the finish.

Behind, Mattia Pasini won the fight for seventh ahead of Jonas Folger, Danny Kent and Marcel Schrotter.

Morbidelli's Marc VDS teammate Alex Marquez was another retirement, pulling out of the race with arm pump.