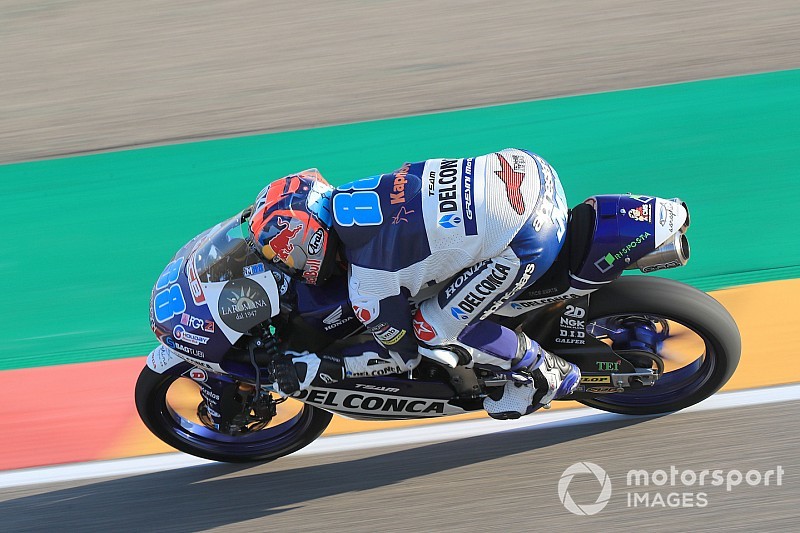 Jorge Martin extended his advantage at the head of the Moto3 standings with an utterly dominant display at Aragon.

From pole position, Martin made the perfect start to lead into the first corner, and from there the Gresini Honda rider simply waltzed away from the pack.

In the end Martin crossed the line unchallenged for his sixth win of 2018, and his first since July's Sachsenring race, by 5.9 seconds.

The Spaniard's main title rival Marco Bezzecchi (PrustelGP KTM) likewise put in an exceptional performance, rising from 18th on the grid to second to limit the damage to his championship aspirations.

Bezzecchi had qualified sixth but was demoted 12 places on the grid for slow riding - along with a host of other riders, including front-row qualifier Enea Bastianini (Leopard Honda) - but made relentless progress in the opening laps.

He completed the first lap in 12th, before rising to sixth by the end of lap four and then taking up the mantle of Martin's chief pursuer on lap five, albeit he was already 4.2s down on the race leader.

After making some inroads on Martin's advantage, Bezzecchi soon found himself embroiled in a huge scrap for the runner-up spot with Bastianini, who made similarly rapid progress from 15th on the grid, Marcos Ramirez (Bester Capital Dubai KTM) and Martin's Gresini teammate Fabio Di Giannantonio.

Bastianini, Ramirez and Di Giannantonio all enjoyed spells leading the group, but on lap 14 Bezzecchi snatched the place back and managed to open up a small gap that he maintained to the finish.

It means he now trails Martin by 13 points with five races to go.

Claiming the final podium spot was Bastianini ahead of Di Giannantonio and Ramirez, helped by a late crash for Gabriel Rodrigo (RBA KTM), who was also penalised and had come up from 20th on the grid to join the battle for second.

Tatsuki Suzuki, Albert Arenas were sixth and seventh, on the tail end of that group, while Adam Norrodin and Jaume Masia dropped back and ended up eighth and ninth respectively ahead of John McPhee.

Misano winner Lorenzo Dalla Porta could only manage 13th from 22nd on the grid, while erstwhile title contender Aron Canet pulled out at mid-distance with shoulder pain.