Angel Nieto rider Albert Arenas beat Lorenzo Dalla Porta to win a thrilling Moto3 race in Thailand as Aron Canet had a drama for the third time in four races. 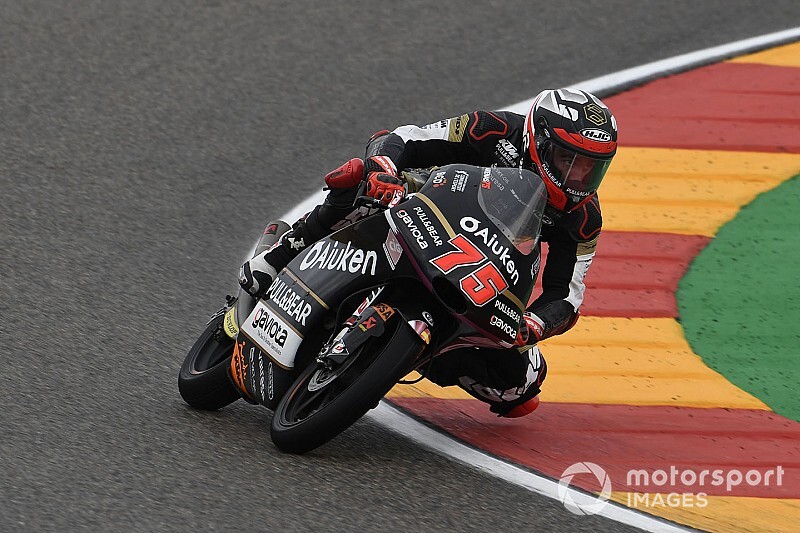 Canet was taken out by Darryn Binder when the Australian made contact with his bike at Turn 12, sending the Spaniard, as well as John McPhee and Tatsuki Suzuki, into a crash.

It is Canet's third retirement in four races as he was hit by Arenas at Silverstone, and then had mechanical problems at Misano.

Fellow title contender Tony Arbolino also had trouble as he went wide, seemingly struggling with a hurt right hand, and dropped outside the pointscoring positions - although he recovered to 10th.

Dalla Porta meanwhile spent the entire race in the top positions, and also led into the final lap when the massive lead group broke up for the first time due to Andrea Migno barging into Marcos Ramirez at Turn 12 of the penultimate lap.

Only two riders, Alonso Lopez and Arenas, were left to challenge Dalla Porta, who survived the long straights only to be overtaken by Lopez at Turn 4.

Dalla Porta attempted to steal the win at the last corner but ran wide on the exit and it was Arenas crossing the line first, with Dalla Porta settling for a sixth second-place finish this year.

He still benefited from Canet's and Arbolino's issues and extended his championship lead to 20 points over the former.

After hitting Ramirez, Migno then crashed while trying to overtake Ai Ogura at Turn 1, the duo retiring on the spot.

Ramirez recovered to fourth as a result with Sky VR46 duo Dennis Foggia and Celestino Vietti completing the top six.

Ayumu Sasaki and Jose Julian Garcia, who replaced the injured Fenati and impressively ran inside the top 10 for most of the race in his only second Moto3 appearance, both also crashed.

Apart from Fenati, Niccolo Antonelli, Jaume Masia, Can Oncu all skipped the weekend with injuries, while Gabriel Rodrigo fractured the second metatarsal on his right foot in the morning warm-up.