The 22-lap Moto3 race kicked of Sunday’s action at the TT Circuit Assen, with Japan’s Sasaki taking a maiden grand prix victory in a chaotic race.

Sasaki started from pole but lost out to Leopard’s Tatsuki Suzuki off the line, before one of the title favourites Izan Guevara on the Aspar GasGas took the lead at the end of the second lap.

Guevara led for the next 17 laps as the pack behind chopped and changed, before Sasaki came through at the Turn 5 hairpin in the closing stages.

Sasaki would make his decisive move at the end of the penultimate lap as Guevara got swallowed back into the lead group of nine.

Coming into the Turn 9 left-hander, the lead group shrunk when BOE Motorsport rookie David Munoz crashed and wiped out Ajo KTM’s Jaume Masia, while Sasaki’s teammare John McPhee slid out in his own incident.

Through the final sequence of corners, Guevara snatched second back from Suzuki as the sister Aspar GasGas of championship leader Sergio Garcia came from 18th on the grid to snatch third.

Suzuki was fourth at the chequered flag ahead of Prustel GP’s Xavi Artigas and Ajo KTM’s Dani Holgado, who had to serve a long lap penalty early in the race.

Garcia holds a slender three-point championship lead going into the five-week summer break from Guevara, while a late crash for Leopard’s Dennis Foggia has cast him 67 points adrift in third. 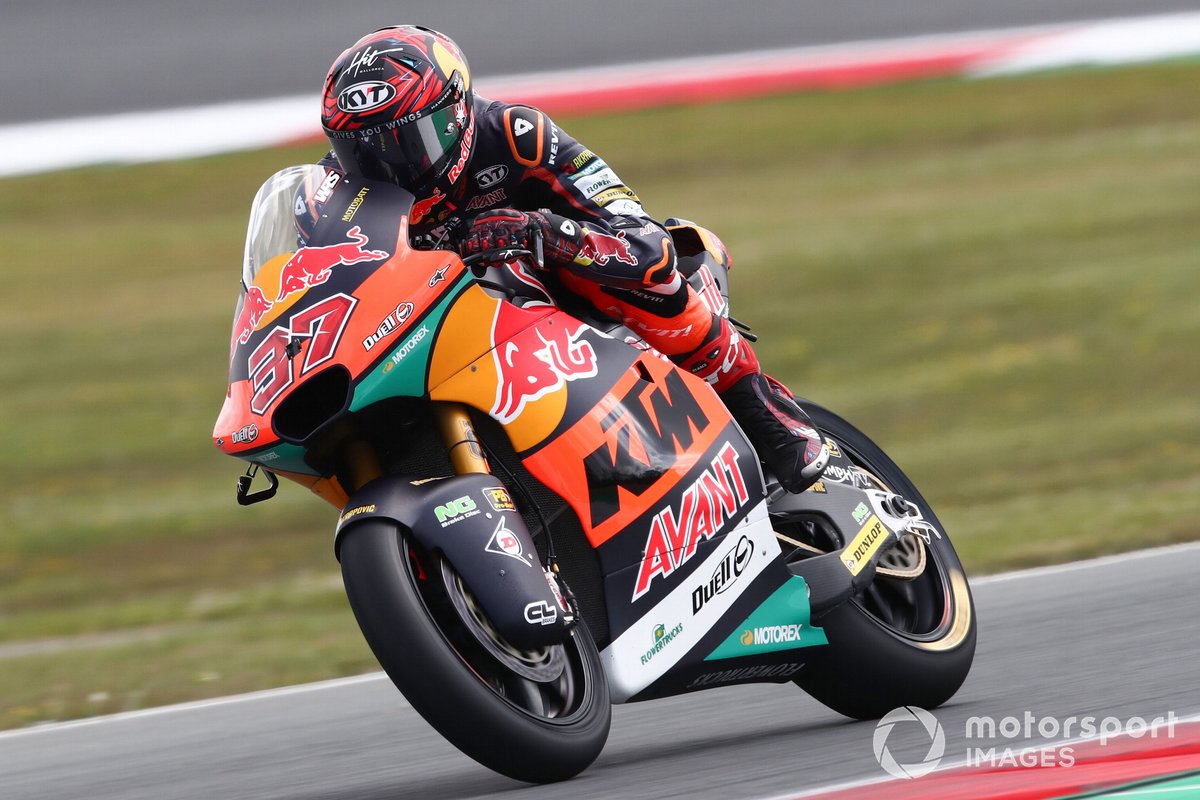 In the 24-lap Moto2 race, Ajo KTM’s Augusto Fernandez took his third win of the 2022 season to move into a joint lead of the championship after a dramatic grand prix.

Speed Up rider Alonso Lopez led the early stages after jumping poleman Jake Dixon off the line, and headed the pack until the eighth tour when Intact GP’s Marcel Schrotter came through into Turn 6.

Schrotter, seeking his first grand prix win, would crash out at Turn 5 on lap 12, which promoted Aspar’s Albert Arenas into the lead ahead of Fernandez.

Fernandez would come through into the lead in the latter stages, while Arenas would crash on lap 22.

Once clear, Fernandez broke away to take victory 0.660s clear of Honda Team Asia’s Ai Ogura, who recovered from a massive scare on the opening lap that dropped him to 16th to take second.

Poleman Dixon on the Aspar bike completed the podium ahead of VR46’s Celestino Vietti, who missed the rostrum by just 0.033s in fourth.

Home hero Bo Bendsneyder on the SAG Racing machine was fifth ahead of Lopez, who ran off at Turn 1 late on, with Marc VDS’ Tony Arbolino, Joe Roberts (Italtrans), Yamaha VR46 Master Camp’s Manuel Gonzalez and Gresini’s Filip Salac rounding out the top 10.

Vietti holds the championship lead but is level on 146 points with Fernandez, while Ogura is just one point back in third.

Pons Racing’s Aron Canet is now 30 points off the lead having been forced to miss the Dutch GP due to nosebleeds as a legacy of a car accident prior to last week’s German GP.

Ajo KTM rookie Pedro Acosta was also forced to sit out this weekend’s Dutch GP after breaking his leg in a motocross training accident earlier this week.

The Angeluss MTA Racing team will field an all-female rider and mechanic wildcard entry for the Moto3 Aragon Grand Prix in September in an historic first for MotoGP.