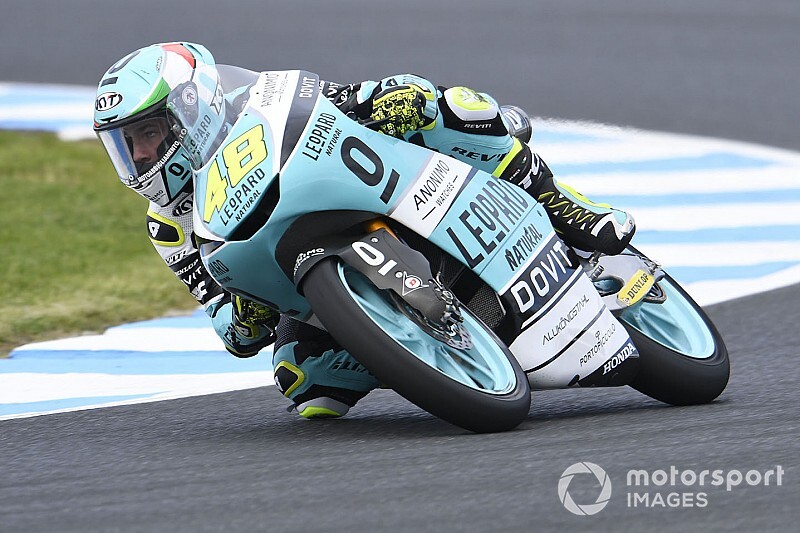 Lorenzo Dalla Porta capitalised on an early crash for Aron Canet to wrap up the 2019 Moto3 title at Phillip Island on Sunday.

Dalla Porta needed to outscore Canet by four points to seal the crown in Australia, but his coronation appeared in doubt when he slipped from sixth to ninth at the start of the race.

However, Canet, who was battling for the lead after starting on the front row, lost the rear of the bike at Turn 1 on lap 3, marking his fourth DNF in five races and ending his slim chances of snatching the title.

With Canet crashing out of the race, Dalla Porta hit the front a lap later, but was unable to break away from the field at a track where slipstreaming often plays a major role.

Romano Fenati, Tatsuki Suzuki, Darryn Binder and Kaito Toba all enjoyed stints in the lead, but Dalla Porta was always able to return to the lead as the field virtually shuffled every lap.

On the final tour Suzuki seized the lead from Dalla Porta at Turn 3 and managed to hold onto the bike amid a massive moment, only for Dalla Porta to snatch the spot back at Turn 8.

The Leopard Racing rider held onto victory by just 0.077s and with it clinch the title, with his teammate and pole-sitter Marco Ramirez securing second place at the last moment.

Binder was classified sixth astride the CIP bike, ahead of Ayumu Sasaki (Petronas) and the South African's teammate Tom Booth-Amos.

Stefano Nepa was ninth for Avintia, with VR46 rider Dennis Foggia 10th and Fenati slipping to 11th at the flag.