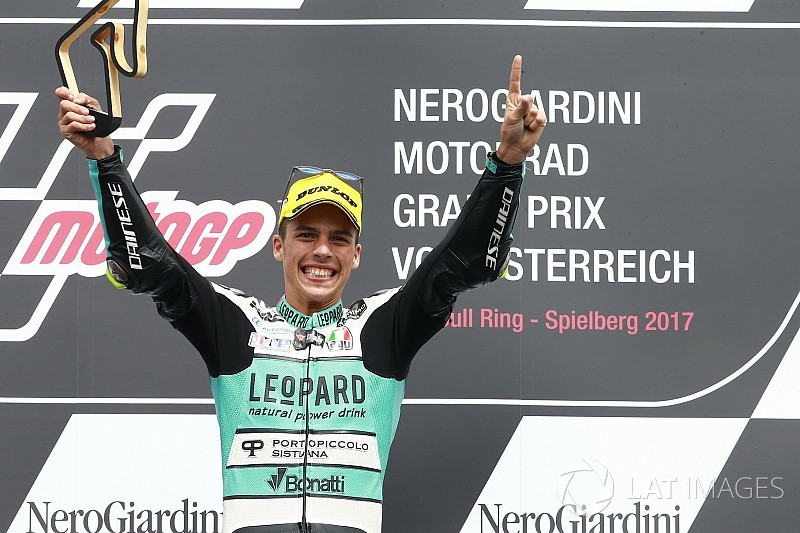 Leopard Racing's Joan Mir extended his Moto3 points lead with a comfortable seventh win of the season at the Red Bull Ring.

Mir became the first rider since Valentino Rossi to win seven or more times in the first 11 races of the lightweight category.

Despite starting 10th after his best lap was deleted due to a track limits violation in qualifying, Mir was made his way into the lead in six laps.

Schedl GP's Phillipp Oettl came close to passing him on Lap 10 but, after Mir held the German off, he rapidly pulled away from the rest of the leading group that was battling for second until the end of the race.

Mir eventually won by 3.045s over Oettl, who held on to second after Sky VR46 rider Andrea Migno crashed at Turn 1 from that very position.

Gabriel Rodrigo (ROE Racing) failed to convert his second consecutive pole position into a win, as he quickly lost ground after the start and had to settle for seventh.

Adam Norrodin (SIC Racing) claimed eighth ahead of rookie sensation Jaume Masia, who stood in for the injured Darryn Binder at Platinum Bay.

The 16-year-old impressed by fighting through the field and at one point even ran second before losing ground during the final stages.

Enea Bastianini (Estrella Galicia) completed the top 10, as Mir's main title challenger Romano Fenati had a quiet race in 12th. As a result, Mir has extended his points lead to 63 points.