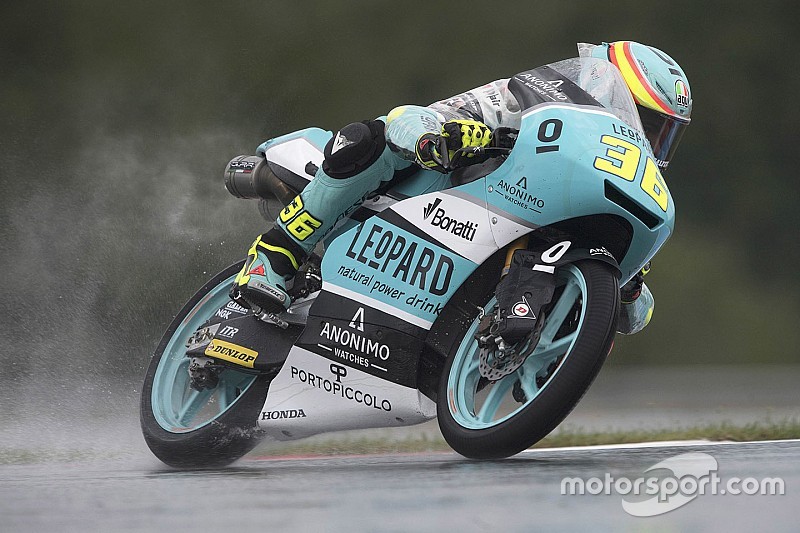 Leopard Racing's Joan Mir extended his Moto3 championship lead by beating Romano Fenati to triumph in a wet-dry Moto3 race at Brno, his sixth win of the season.

While the race started with a duel between Bo Bendsneyder (Ajo KTM) and Juanfran Guevara (RBA KTM), Mir and Marinelli Rivacold Snipers rider Fenati made it a four-way fight for the final 10 laps.

After staying back in fourth for several laps, Mir finally slipstreamed past both Fenati and Bendsneyder at Turn 3, also passed Guevara on the same lap, and started to build a small lead.

However, Fenati soon closed the gap back down, as the duo escaped from Guevara and Bendsneyder.

While Fenati entered the final lap right behind Mir, the Italian did not find an opportunity to overtake and he had to settle for second for the fourth race in a row.

Aron Canet (Estrella Galicia) completed an impressive recovery ride from 17th on the grid and 22nd after the first lap, and claimed third after passing Bendsneyder and Guevara on the final tour.

The aforementioned duo took fourth and fifth with John McPhee (British Talent Team) finishing sixth from 19th on the grid, ahead of Marcos Ramirez (Platinum Bay).

German wildcard Tim Georgi made it as high as eighth at one stage, 20 places higher than his grid slot, but couldn't keep his pace up in the dry and slipped to an eventual 18th.