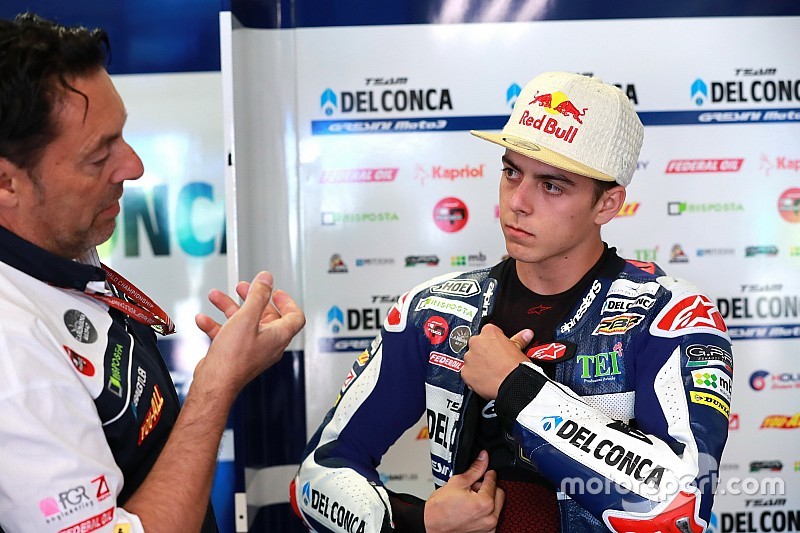 Gresini Moto3 rider Fabio Di Giannantonio has been taken to hospital after a nasty crash in Sunday's Motegi Moto3 race.

Di Giannantonio suffered a huge high-side exiting the Turn 12 left-hander on the sixth lap while running on the fringe of the top 10, and was taken to the medical centre for checks immediately after his accident.

He was transported to hospital for further examination for what was described by MotoGP's official Twitter account as "cranial trauma". Italian TV also reported he was briefly knocked unconscious in the incident.

It puts Di Giannantonio, who came to Motegi as an outside bet for the Moto3 title, in doubt for next weekend's Phillip Island round, as well as for Sepang the following week.

He remains 29 points adrift of points-leading teammate Jorge Martin in the standings, with Martin compounding a miserable race for the Gresini outfit by crashing out while battling for the lead.

Di Giannantonio has already secured a graduation to Moto2 next season with the Speed Up team.

Di Giannantonio was not the only rider to injure himself at Motegi, as Niccolo Antonelli sustained a back contusion and left foot fracture in his early tangle with Vicente Perez.

UPDATE: In its post-race press release, Gresini offered an update on Di Giannantonio's condition, saying that a CT scan in hospital has "excluded any physical consequence" of the crash.

He will remain in hospital overnight before travelling to Australia on Tuesday, although it remains to be seen if he will be declared fit to ride at Phillip Island.