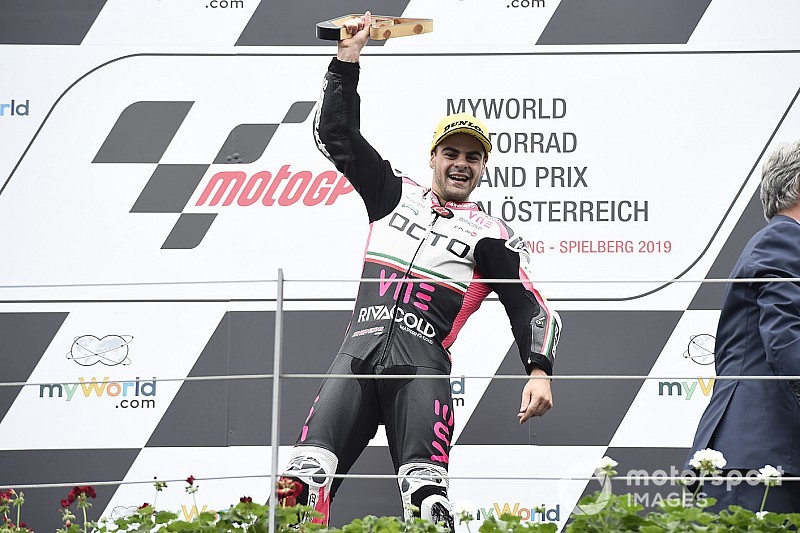 Romano Fenati took the first win of his comeback Moto3 season at the Red Bull Ring, escaping into the distance after fighting off teammate Tony Arbolino.

Fenati, whose debut Moto2 season last year was cut short when he was sacked by his team for grabbing Stefano Manzi’s brake lever at Misano, was only 16th in the lightweight-class standings this year coming into Red Bull Ring, yet set the fastest time in qualifying.

John McPhee had inherited pole position from Fenati following a raft of post-qualifying penalties, but lined up on a wet patch on the grid as a result of some rainfall in the morning.

He thus immediately dropped behind the two Snipers riders, with Arbolino and Fenati scrapping for the lead until the lattter ran wide at Turn 4 and allowed McPhee back through.

Unusually for Moto3, the leading trio began to break away swiftly after that, pulling as many as three seconds over the chasing pack by the time Fenati fought back through to the lead at the start of the fifth lap.

He and Arbolino swapped the lead several times over during the next few laps, but after getting back ahead on the ninth lap, Fenati began to make a break for it, streaking away as his teammate switched focus to fighting off McPhee.

Fenati stretched the gap over the pair to two seconds and maintained it from there onwards, easing up the pace towards the end to finish a second clear.

Behind him, Jaume Masia and Celestino Vietti had closed in on the Arbolino – McPhee scrap, and on the penultimate lap Masia tried to send it down the inside of the Scotsman for third, only to run out wide and highside off the bike on the wet part of the circuit.

This allowed Vietti into third past McPhee, but while the Italian then challenged Arbolino for second, he was instead re-passed by McPhee on the run to the chequered flag in a photo-finish.

Marcos Ramirez led Leopard teammate Lorenzo Dalla Porta in fifth, the latter taking the championship lead by one point over Aron Canet, who had to settle for 10th, some 18 seconds behind Fenati.

Makar Yurchenko scored a career-best seventh place, as he, Jakub Kornfeil and Niccolo Antonelli, slotted in between the two title rivals.

Raul Fernandez, Tatsuki Suzuki, Sergio Garcia, Andrea Migno and Can Oncu joined Masia in crashing, with Oncu first tagging the back of Stefano Nepa at Turn 3 and then falling once more at Turn 9.

Tech 3 follows KTM in pulling out of Moto2