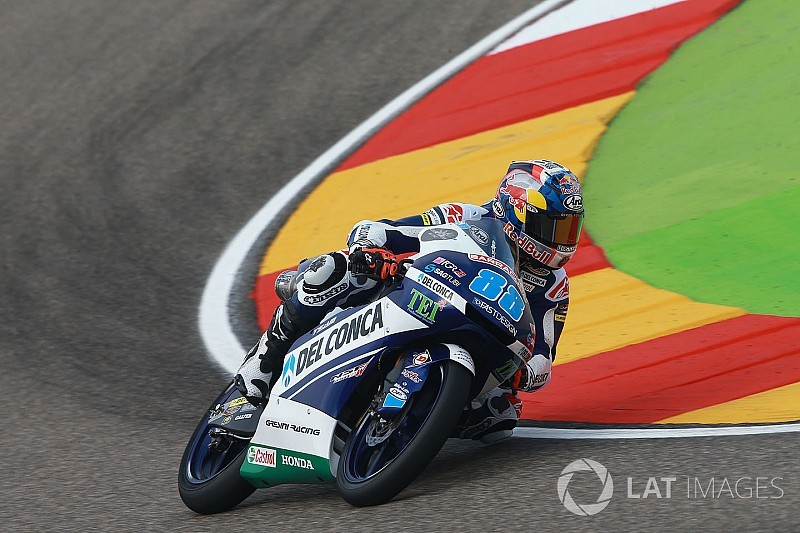 The Gresini Moto3 team has announced it will retain both Jorge Martin and Fabio di Giannantonio next year.

Martin joined Gresini from the Aspar squad this season, and has established himself as one of the lightweight class's frontrunners with seven pole positions and six podium finishes.

The Spaniard lies fifth in the current standings with four races to go, one place behind di Giannantonio, who is in his second season with the team.

Like Martin, di Giannantonio is still chasing a first grand prix victory, missing out by only 0.043 seconds to championship leader Joan Mir in Aragon.

“I’m very happy to stay within the Gresini family next year," said Martin. "I feel at home here and I’ve had that feeling since the first tests this season.

"We have a really competitive package and next season we’ll be aiming for the championship. That was the goal this year but with the injuries and some things happening that were unexpected, it wasn’t possible."

Di Giannantonio commented: “I’m really happy to continue this journey together which started a year and a half ago, and to be doing so with this amazing team is priceless.

"The goal is to improve year after year and race after race. 2018 will be my third year in the series and the goal will be to finish the season in the top three."

Elsewhere, it has been announced that Moto3 veteran Jakub Kornfeil will stay in the series next year with his current Prustel GP team, which runs its Mahindra bikes under the Peugeot brand.

French squad CIP has also signed up Kazakh youngster Makar Yurchenko, who races in CEV Moto3, for a step up to world championship level in 2018.

Herrera sidelined as AGR squad pulls out of Moto3