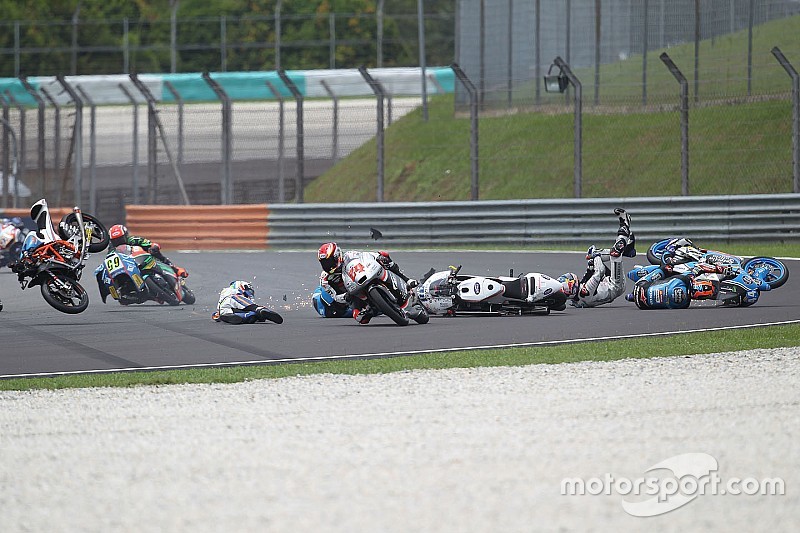 Maria Herrera and Nicolo Bulega were among seven Moto3 riders who were injured due to various incidents in a brutal race of attrition at Sepang.

KTM rider Herrera was running ninth, battling with the Honda of Livio Loi after she started from the back of the grid, when she made contact with the Belgian at Turn 15 and crashed.

The Spaniard's accident brought out the red flags, which ended the race on Lap 15 with Francesco Bagnaia winning.

It was later revealed that Herrera fractured her right collarbone in the crash, putting her in doubt for the season finale at Valencia in two weeks' time.

On the opening lap, Sky Racing Team VR46 rider Bulega was caught up in the incident initiated after Aspar Mahindra's Jorge Martin had a high-side crash at Turn 6.

As Martin fell, it created a domino effect that took out Bulega, along with Estrella Galicia's Aron Canet and Schedl Racing's Phillipp Oettl.

Bulega got back to the pits, but was taken to the medical centre along with Martin and Oettl for precautionary checks.

"I touched a damp patch, went down and then another rider ran into me," Martin said. "I was pretty dizzy but I had a CAT scan and now we know for sure that everything is okay."

Elsewhere, Drive M7 SIC rider Adam Norrodin, who crashed out at Turn 7, was reported to have suffered a humeral contusion, but later on was declared fit.

The Malaysian slid into the gravel, and was followed by Brad Binder, Fabio di Giannantonio and Lorenzo dalla Porta - all three sliding out of contention but escaping injury.

Finally, Ayumu Sasaki, making his Moto3 debut in place of an injured Enea Bastianini on the Gresini Honda, crashed out at Turn 6 on the first lap and was diagnosed with concussion.