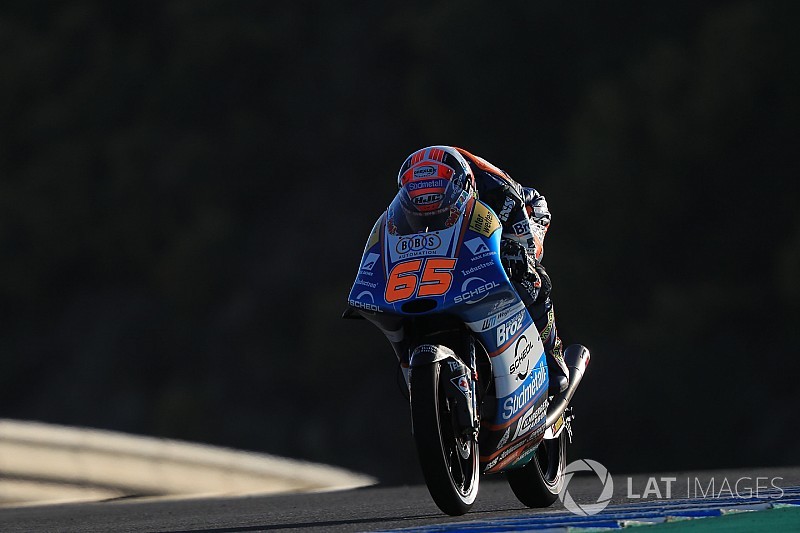 Canet lost control of his bike into the Dry Sac right-hander, causing a pile-up and leaving KTM rider Oettl with a clear run to his first Moto3 victory in his 91st start in the category.

Starting from pole position, Martin led the way off the line and held off the early pressure from Gresini Honda teammate Fabio Di Giannantonio.

He briefly managed to put some daylight between himself and his rivals, but was soon reeled in by Di Giannantonio – who attempted a pass down the inside of Dry Sac but ran wide, compromising both himself and Martin.

This kicked off a flurry of lead changes, with Enea Bastianini, Marco Bezzecchi, Martin, Tony Arbolino and Oettl taking turns leading what was an 18-bike front group.

As the race approached and passed the halfway point, Oettl managed to consolidate first place and pull out a minor gap – but it was not for too long, as Arbolino picked off the German with eight laps to run.

Oettl reclaimed the spot a lap later and then fought off a final-corner Martin attack, only to be swarmed by Bastianini and Arbolino next time by.

By that point, the lead group had whittled down to six riders – and soon only Oettl and Bezzecchi were left on their bikes.

Having got a big tow on the back straight, Canet was too hot coming into the Turn 6 right-hander and clobbered his rival Martin, with the crash eliminating Bastianini and Arbolino as well.

The incident left Oettl with an advantage out front, and while Bezzecchi closed in on the German and harried him all through the final lap, he finally settled for second place – and became the new championship leader.

Rookie Alonso Lopez ran up front early on but dropped back after an early run-in with Oettl forced him into a trip through the gravel.

He recovered to third place on the road, but was then forced to drop a position due to exceeding track limits, with Marcos Ramirez inheriting the podium spot instead.

The Canet incident was not the only major chain reaction crash of the race, as John McPhee had triggered a pile-up when he ran into the back of Lorenzo Dalla Porta on the opening lap – with Dennis Foggia eliminated as a result as well.